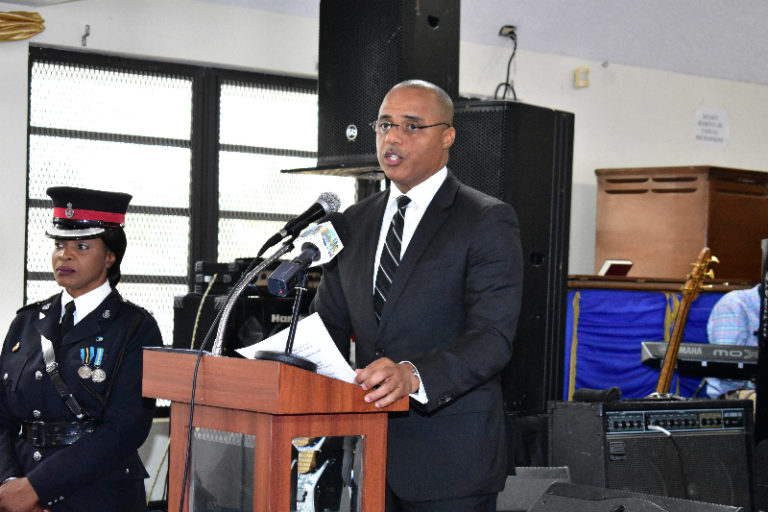 FREEPORT, Grand Bahama — Minister of National Security, the Hon. Marvin Dames says that in the coming months, the government will present many new policies which they have spent a considerable amount of time on, that are holistic in scope and are expected to complement current law enforcement efforts of restoring peace in the country.

“This will happen through improved strategy, acquisition of new equipment, enhanced training of officers and building capacity, not only in New Providence, but throughout the entire Bahamas,” added Minister Dames.

The National Security Minister’s comments came during his address during the Grand Bahama & Northern Bahamas District, Royal Bahamas Police Force annual Church service, which was held at the Central Church of God on Sunday, January 14th, 2018.

During his address the National Security Minister acknowledged the three murders in Grand Bahama, which took place at the beginning of the New Year. While he admitted that the events were unusual for the Second City, he said he was thankful to the police on Grand Bahama, for bringing closure to those homicides in an expeditious manner.

He reassured Grand Bahamians that the government is cognizant of the issues facing Grand Bahama in respect to violent crimes and have already begun taking measures to ensure that improvements in crime fighting in 2018 become evident throughout the island, especially in those pockets where violent crime is of great concern.

“We want to send a message to all those in Grand Bahama who continue to live a life of crime that we are unwavering in our efforts to find you wherever you hide and make you account before the court of law for your actions,” said Minister Dames.

“Let me remind you that there is no hiding place for anyone who seeks to tarnish the reputation of our nation to satisfy their selfishness and greed, and there is no one you can go to or call on, to protect you from the long arms of justice.”

Minister Dames told law enforcement officers that his government is serious about improving infrastructure and providing them with the necessary equipment to perform all their duties optimally and professionally.

He noted that with the construction of a new police and fire station on Grand Bahama now completed, the government is now working to ready that station to improve policing services.

“As Minister of National Security, I have also acutely aware of the inferior working conditions that many of you have had to contend with for far too long,” added Minister Dames. “West End comes to mind. I have seen pictures of the infrastructure at the West End station and seen firsthand on a visit after coming to office.

“We cannot expect you to give of your best when we fail to acknowledge and fix the substandard environment in which you work.

“Let me assure each of you that we are going to rectify these issues and put our money where our mouth is. We are taking corrective steps to have your dilapidated stations and other buildings that officers occupy completely renovated.”

The National Security Minister said that he is aware of the rumors that Grand Bahama is frequently used as a gateway for trafficking of persons, illegal drugs and guns from North America, into the rest of the archipelago.

To combat this, Minister Dames said that the police department will use a multi-agency approach in 2018 to combine intelligence capacity, skills and resources and continue to partner with regional and international counterparts to remain a united front against transnational organized crime that threatens the existence and stability of the nation.