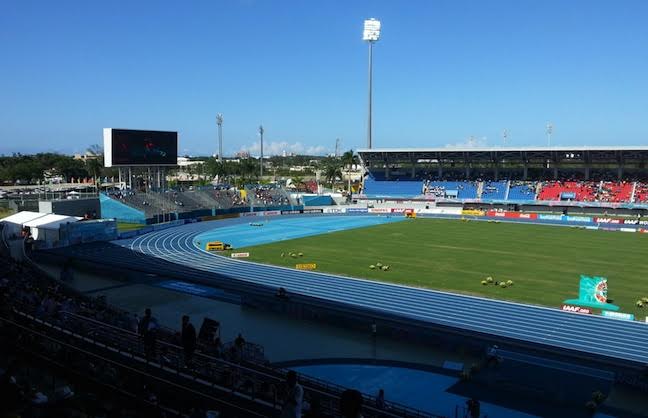 Inside the Thomas A. Robinson National Stadium.

With the 2018 Caribbean Free Trade Agreement (CARIFTA) Track and Field Championships set to begin in less than 48 hours, North American, Central American and Caribbean (NACAC) officials, including NACAC president Victor Lopez, took a final tour of the stadium Thursday to ensure all preparations are in place ahead of the games.

The opening ceremony takes place tonight at the stadium with the first races set for Saturday morning.

“This stadium has come so far in such a short time,” Lopez said.

“It feels like every time I come here there is something new or something that has been changed around here. You are always working hard to ensure that whatever you host is done right.”

Lopez expressed his confidence in The Bahamas’ ability to host the games and proclaimed the Thomas A. Robinson National Stadium as one of the best stadiums in the Caribbean.

The games, which is set to be held over the Easter holiday weekend, is the first CARIFTA Games to be held in The Bahamas following the hosting of the 2014, 2015 and 2017 International Association of Athletics Federations’ (IAAF) World Relays.

The last CARIFTA Games held in The Bahamas was in 2013 and was also the first international track and field event held in the new stadium which was presented as a gift to The Bahamas from the People’s Republic of China in 2012.

“We are very excited, because every time The Bahamas has hosted CARIFTA, it has been very successful,” Lopez added.

“I remember when Keith Parker – a long time ago – used to be in charge of the concession stands and the financial area, and he always told me that we made a profit. I hope this time is as good as it has been in the past.

“I think it is going to get so full that they are going to stop letting people in. CARIFTA by itself is unique because it’s not only about athletics, it’s also about culture, heritage and friendship within the region. It is going to be a great week in The Bahamas.

“It is the eighth time you are hosting, which speaks highly about your organizational skills, and now with the new stadium, I think this will be even bigger than the IAAF World Relays.”

The 2018 BJ Nottage Flow CARIFTA Games will take place in New Providence, from March 30 to April 2, at the Thomas A. Robinson National Stadium.