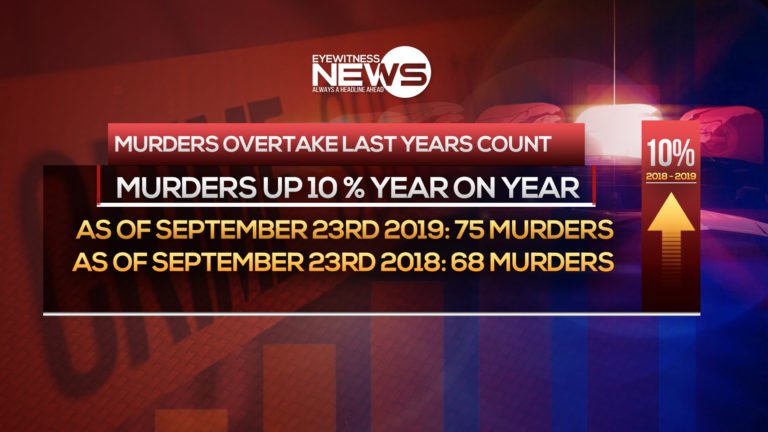 NASSAU, BAHAMAS — Murders in The Bahamas have increased over 2018 for the first time this year.

The rate of homicides had been steadily trending downward in late 2017 through the end of last year, with the country recording its lowest count in almost a decade.

There have been 75 killings, a 10 percent increase over the 68 murders recorded between January 1 and September 23, 2018.

Speaking to Eyewitness News Online, Commissioner of Police Anthony Ferguson attributed the increase to several recent double murders, some of which authorities believe to be gang retaliation.

There have been 13 murders in the last two weeks.

“If you were watching the rate over the last week,” Ferguson said, “you find that last year where you were having one person get killed, over the last week or last couple of weeks you are seeing where two people were being killed at the same spot.

“That [can be] attributed to the increase. The police will continue to do what we have been doing all year-round; being visible on the streets, [visiting] those hotspots and dealing with those, arresting persons who are responsible for committing crimes.

The commissioner continued: “We will continue to do that. Really you have no control of knowing when someone will go and kill someone. Crime is dynamic, and so you have to constantly be visible and carry out your prevention activities. The Royal Bahamas Police Force has been doing that.”

The latest killing occurred last Wednesday. Authorities said a man sitting in his vehicle at Bimini Avenue, off Market Street, was approached by an armed man who shot hit before running away. The victim died in hospital.

Jamaican Tenneson Vaught Leslie, 39, and Gloria Estella Rolle, 58, a Bahamian, were stabbed to death at a residence on Gladstone Road around 4 a.m.

A man was also shot and killed in front of a home on First Street, Coconut Grove, last Sunday.

To the spate of recent murders, the commissioner said a number of people have been arrested in connection with those killings.

“As the investigators continue to investigate, hopefully we are able to bring closure to those,” Ferguson told Eyewitness News Online.

“Once we get those persons off the street, then I am sure that you would see a mass reduction. But I continue to say it — those people involved in illegal activity; those who are warring with one another; somebody out of the grouping or some person who is connected to that grouping, whether it is a relative or friend, they ought to be concerned about those persons and provide information to the police, so there could be an early intervention. Policing is public partnership.”

Eyewitness News has previously reported on the margin of decrease year-over-year steadily diminishing over the last nine months.

For example, at of the end of January, murders were down 51 percent over the same period last year.

By the first quarter of this year — January 1 through March 31 — murders were down 26 percent.

By June, murders were down 21 percent. Ten people were murdered in that month alone.

As of mid-July this year, murders were down only 17 percent compared to last year.

The margin of decrease further dropped to 10 percent in August — 55 murders, compared to 61 up to the same point last year.