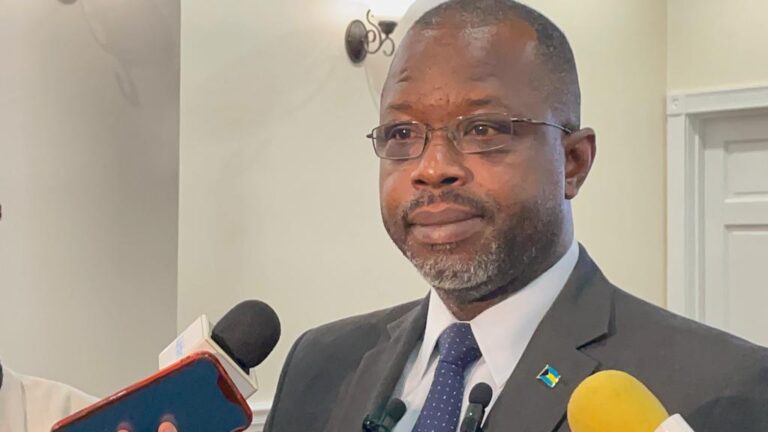 Minister of National Security Wayne Munroe addresses reporters at the Office of the Prime Minister.

NASSAU, BAHAMAS — Minister of National Security Wayne Munroe said there is no known security risk connected to the transition between electronic monitoring system providers that may have allowed some people who should be monitored to fall through the cracks.

Eyewitness News reported this week about Rebecca Hepburn, a 41-year-old woman who said an ankle monitoring device she received after being convicted of attempted murder in December 2020 was not removed from her foot even after she had fulfilled all of the requirements and obtained a court order.

The woman said authorities gave her the run around as she tried for weeks to get the bracelet removed. The bracelet, she said, affected her job hunt.

She had received the device as part of her conditional release. She said she received a court order permitting the removal of the device about two months ago.

The device was ultimately removed from her foot after EWN’s television report aired.

Retired Assistant Commissioner of Police Leon Bethel, head of Metro Security Solutions, the company that currently monitors people on the programme, told EWN the woman was not on their system, meaning she was not being monitored.

The case raised questions about whether there are others like her in the country.

“I don’t know anything about that,” Munroe said yesterday.

“When they changed over to Metro there was a precise programme where the court provided a list of everyone to be monitored, most here, some in Grand Bahama and a couple on the Family Islands. I think they even went to Family Islands so it wasn’t a guess at who has to be monitored, it was a you are listed, you have on a monitor from the past company and so they continued to monitor until it was changed over, that’s why that would not make any sense.”

Bethel said during the transition the Ministry of National Security led a process that saw participants in the programme visit the Bahamas Department of Corrections to have their devices switched.

“Now what we have discovered that is being addressed swiftly is some people were playing games. You were being monitored; if you got arrested for something else, you would go back into prison. They don’t keep a monitor on you in prison and then the person would either serve a small sentence or get bail for another offence and depending on where they were released from, they might not be released from the monitor from the first bail. That’s the only slip up that I know about and the police are addressing that just by picking the people up and tagging them.

He continued: “I don’t know how (Hepburn’s case) could happen because the company was supposed to recover their devices and there was a check-off that was overseen by the legal department of the ministry because we have to keep records.

“Every month we pay depending on how many people were being monitored. So the contract, I think we met that one executed, so the handover was due to start from like October-November. So in October we would pay the old provider, which I believe was Migrafill. If they said they had 1000 people being monitored, we’d pay them for monitoring 1000 people. Then as the transition proceeds, let’s say Metro say they now have 200, Migrafill has 800; we pay Migrafill for 800, Metro for 200.

“Then in December, (if) they say we have 500 and 500, we pay Migrafil for 500, Metro for 500, and it went like that until the final one was done. So without someone showing me here is the banana, here is the skin, I could not see how it would not work.”