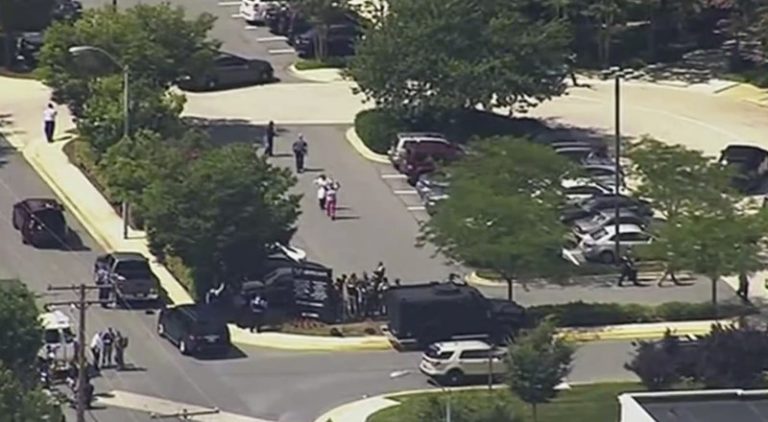 In this frame from video, people leave the Capital Gazette newspaper after multiple people have been shot on Thursday, June 28, 2018, in Annapolis, Md. (WJLA via AP)

ANNAPOLIS, Md. (AP) — Multiple people were shot Thursday at a newspaper in Annapolis, Maryland, with a witness saying a single gunman fired into the newsroom.

A reporter at The Capital tweeted that a single individual shot multiple people. Phil Davis, who covers business and politics for the newspaper, tweeted that the gunman shot through the glass door to the office and opened fire on multiple employees.

He added, “There is nothing more terrifying than hearing multiple people get shot while you’re under your desk and then hear the gunman reload.”

The federal Bureau of Alcohol, Tobacco, Firearms and Explosives said it was responding to reports of the shooting.

Anne Arundel County Police Department spokesman Marc Limansky said officers were searching the building where the shooting was reported. He said the situation is “active and ongoing.”

On TV reports, people could be seen leaving the building with their hands up, as police officers urged them to depart through a parking lot and officers converged on the building.

Lt. Ryan Frashure, another spokesman for Anne Arundel County police, said on WJLA that officers are “doing everything to get people out safe.” He said they must look for other dangers, such as bombs and other shooters.

The Capital and newspapers including the Maryland Gazette are owned by the Baltimore Sun Media Group.

Maryland Gov. Larry Hogan issued a statement saying he was “absolutely devastated” at the tragedy. Officials said President Donald Trump had been briefed on it. White House spokeswoman Lindsay Waters told reporters, “our thoughts and prayers are with all that are affected.”