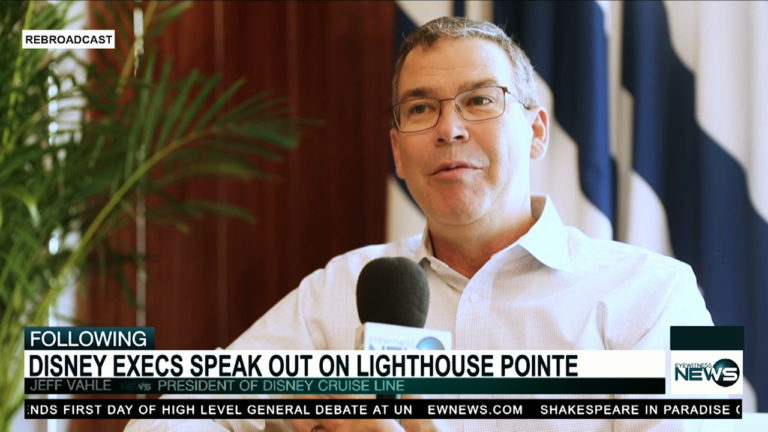 While there have been many concerns about what the planned development at Lighthouse Point could mean – not only for Eleutherans but also for the environment and a historic part of the island the residents want to keep pristine – President of Disney Cruise Line Jeff Vahle, attempted to allay fears on Wednesday as he told Eyewitness News that, because of protests and opposition to the cruise port, there have been major changes to Disney’s original plans.

As it relates to the 150 jobs being offered, Yolanda Cade, the company’s director of public relations said, not only are there managerial jobs available but Bahamian artists will also be engaged in the design and décor of the property.

Environmental groups including Re-Earth Bahamas, the Bahamas National Trust (BNT), Save the Bays and the One Eleuthera Foundation, railed against the proposed plan to sell the privately-owned land to Disney, claiming a cruise port will decimate the environment. However, Kim Prunty, vice president of public relations said, Disney has taken precautions.

Vhale noted that the project already has the funding in place as well as a contract with the buyer of the private land. He said the company is only waiting for government approval. If and when that happens, he said, work will begin on port immediately and will most likely open in late 2022. It will cost approximately $350 to $400 million, he said.

How much of that 350-400 million wills stay within the Bahamas???? A small fraction. They will bring ALL the materials from the US and use their own construction workers save a few. Also if this project is to be so low density and low impact where is all this money going??? This is just terrible terrible news and I hate it to my core.

Disney could care less about the people of Eleuthera or it’s historical significance to the locals and it’s eco-system that will be destroyed. I speak from my own experience with my local government as a past board member in my hometown that you’d better be careful what you allow because once the damage is done it can’t be undone. I beg of the Bahamian government not to approve the sale of this land for Disney’s financial gain. There are many other options that can provide long-term jobs and pride to the island’s Bahamian residents.

The idea that Disney is capable of building this port without damaging the environment would be a farce if it were not such a serious threat to the environment and their economy. You can see what happens when Disney comes in to a pristine natural wilderness in this area in what happened when they went to Great Guana Cay here https://www.notesfromtheroad.com/westindies/big-red-boat.html They destroyed what one travel blogger describes this way, “There was nowhere else in the Bahamas quite like this wilderness, and even as a child I sensed that it was special, not just for the Bahamas but for the whole world.” Between the size of the cruise ship and consequently what they will need to do to the land and water to dock it, the fuel and human waste that will be belched into the water, the fertilizer they will use to create lawns out of bush that will spill into the water, and the sheer numbers of people they will bring in trampling over the land and water there is no way to do this without destroying the natural environment there.

There is a real need for good jobs, especially in the southern part of the Eleuthera near Lighthouse Point; but given their history, there is no way that Disney is going to provide them. see http://www.latimes.com/business/la-fi-disneyland-study-20180228-story.html
Disney just finally paid a living way in Annaheim and that was only after a big fight from a big union. see http://www.latimes.com/business/la-fi-disney-contract-vote-20180726-story.html Eleuthera has none of the protections that unions provide here in the US; workers there could never stand up to Disney to make the kinds of demands that US workers did in Annaheim.

Disney is taking advantage of the fact that in south Eleuthera they are desperate for jobs to lie to them not only about the environmental impact of their port but also about the jobs that they will give to Bahamians. Bahamians who have worked in Castaway Cay were given jobs like sorting through the trash. Also even Disney’s promotional video shows that there are very few Bahamians working there. Most of their employees are brought in from other countries, as you can see in the video https://www.youtube.com/watch?v=WHFPaW3IXow. It is also well knows that Disney keeps their guests fenced in so that they spend all their money in Disney stores and when they do go outside it is to shop in businesses that must pay a percentage back to Disney.