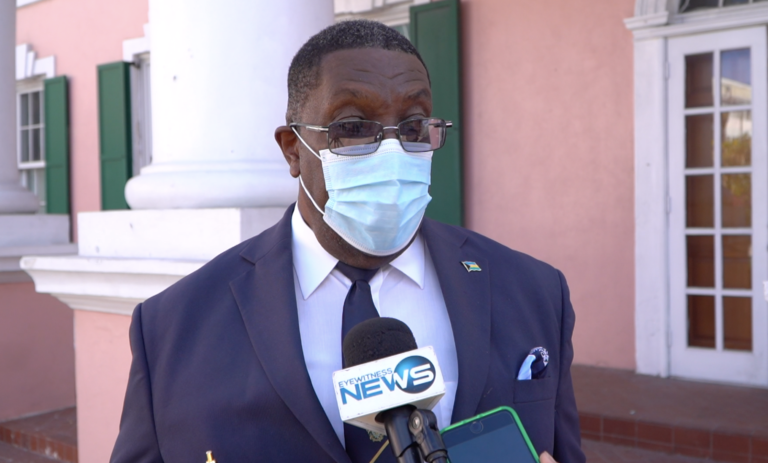 NASSAU, BAHAMAS — Speaker of the House of Assembly Halson Moultrie said yesterday that the Constituencies Commission has sought the legal advice of the Office of the Attorney General and independent legal opinions from a group of Queen’s Counsel on allowing displaced Dorian survivors special voting considering to cast their ballots on Abaco and Grand Bahama.

In an interview with Eyewitness News, Moultrie said he expects the advice before the end of the month.

The Constituencies Commission met on Tuesday.

“Dorian happened in 2019, September, which takes us outside the 12-month period, so…we concluded that we should seek a legal opinion on the matter, particularly with respect to whether or not people who feel an emotional attachment to the constituency, who were displaced by Hurricane Dorian, whether or not they would be eligible to vote,” Moultrie said outside the Senate.

“The reason it is concerning to us is the law is very specific in that there must be a premises in that constituency to make you eligible to qualify as being ordinarily resident there.

“So, if the premises was completely destroyed by Dorian and it hasn’t been rebuilt, you cannot say you are ordinarily resident there because there is no physical structure.

“And so as to avoid taking us way back into the time where you were eligible to vote on any property that you may have owned, whether it be vacant or occupied, we want to make certain that when we get this interpretation of the existing law with respect to persons who have been displaced by Dorian, that decision is a legal decision that complies with the law.

“Otherwise, we would be obliged to make the recommendation to the executive branch of government to perhaps make an amendment prior to the election being called or the House being dissolved.”

The decision would require a change in the law.

According to the Parliamentary Registration Act, a resident is entitled to be registered as a voter in a constituency if they are living there and have been living there for a period of three months.

That ordinary residence is deemed uninterrupted if the individual has resided elsewhere for work or study and intends to resume residence or resumes actual residence within six months of giving up the residence.

Moultrie said the Parliamentary Registration Department and the Constituencies Commission share the concern of Bahamian citizens being disenfranchised as a “consequence from an act of God, which was Dorian”.

“They are also eligible to transfer back into the original constituency should they have a circumstance where they are able to rebuild in time.”

Hundreds of families remain displaced as a result of Hurricane Dorian in September 2019 and the sluggish pace of recovery compounded by the COVID-19 pandemic.

Moultrie continued: “The challenge is for those persons who may have been displaced to the United States or other jurisdictions because it becomes a little bit more difficult and a little bit more challenging because in that circumstance, they would not be eligible to vote because they cannot vote unless they fall into a specific category of persons who are eligible to vote overseas like persons who work at consulates, students, who are registered in school and so on.”

Outside Cabinet last month, Minister of National Security Marvin Dames, who has responsibility for elections, indicated that displaced voters must register in their new constituency as the government cannot circumvent the law.

Central and South Abaco MP James Albury and North Abaco MP Darren Henfield have both previously suggested special allowance be made for displaced Abaconian storm victims to allow them to vote on Abaco in the next general election.