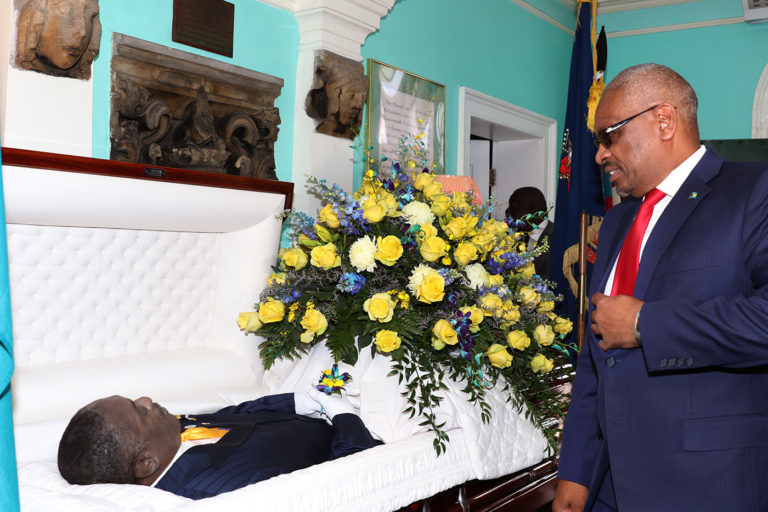 Prime Minister, Dr. Hubert Minnis paid his respects to former Cabinet Minister and Parliamentarian, the late Bradley Roberts at the House of Assembly on Thursday.  The Prime Minister signed the book of condolence as Speaker of the House Halson Moultrie looks on.  The official funeral of Mr. Roberts, will be held on Friday at St. Francis Xavier Cathedral, West Street, at 11:00 a.m.  (BIS Photos/Letisha Henderson)

Roberts, who passed away at age 74 at his residence on October 25, played an integral role in frontline politics within the PLP for over two decades.

Roberts first emerged in public life in the 1977 General Election as a candidate for the now abolished Shirlea Constituency opposing the late Sir Roland Symonette.

He emerged victorious in a by-election following the death of Shadrach Morris the incumbent in the old Grants Town constituency in 1982.

Roberts served as a sitting Member of Parliament from 1982 to 2007.

He did not seek re-election in the May 2nd, 2007 General Election, but he still played an active role on the sidelines of the PLP.

Roberts was Opposition Whip and Leader of Opposition Business in Parliament and he was elected as the PLP ’s National Chairman in 2000.

He was elected Chairman Emeritus during the special convention of 28 July 2018.

Roberts, affectionately known as “Big Bad Brad,” has been remembered by former colleagues and friends as a political heavyweight who never minced his words.

Hours after his passing three weeks ago, both former PLP Leader Perry Christie and current PLP Leader Brave Davis hailed Roberts as a stellar example for budding politicians to emulate.

A memorial service for Roberts, was held at the party’s headquarters on Farrington Road Wednesday night.

Dozens of family members, former colleagues and party supporters attended the memorial to remember his lifelong contribution to the PLP.

Former PLP Leader and Prime Minister Perry Christie and PLP Leader Brave Davis were also on the line up at Thursday’s memorial service.

Following the public memorial on Thursday evening, Roberts’ body was relocated to the foyer of the Lower Chamber to Lay-In-State.

Both Davis and Prime Minister Dr. Hubert Minnis participated in the private viewing in the foyer of the House of Assembly between 9am and 11am Thursday.

He will continue to lay-in-state until the official state recognized funeral which will be held on at 11:00 a.m.

Interment will follow at the Western Cemetery on Nassau Street.