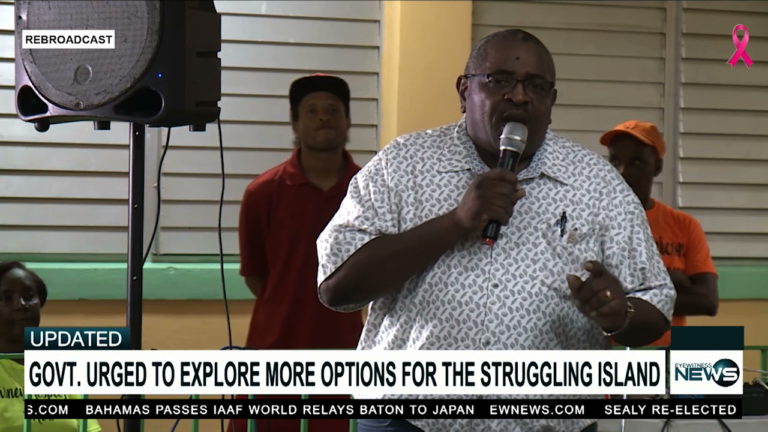 Member of Parliament for Central and South Eleuthera, Hank Johnson.

At a town hall meeting on Thursday, Johnson used the opportunity to ask Dr. Minnis to fix some of the ongoing issues in Central and South Eleuthera, including providing a 24-hour emergency hospital and much need repairs to the schools.

“We are asking our government to consider us, we have some issues and while are here Mr. Prime Minister, I will speak about it,” Johnson said.

“Our medical system needs to be revamped, the time has come for Central and South Eleuthera to have a 24/7 medical emergency centre, with eight to 12 emergency flights throughout the week, that is what we are faced with. We are faced with many other challenges and our schools Mr. Prime Minister needs some attention.”

He also said its time for Rock Sound to have its own dock built to boost the island’s economy.

“Our port of entry’s mean the world to us, especially down in Rock Sound. I am asking you in the front of my people to consider that Rock Sound will have a dock built that will serve the entire community,” he said.

“It is the breadbasket of South Eleuthera, Mr Prime Minister and I think my people’s voice should be heard, it’s time for South Eleuthera to get what we deserve.

In response, Dr. Minnis said he will listen to the people and attempt to fix the problems in a reasonable time.

“I know that South Eleuthera has been suffering for a very, very long time and I think it’s time that your pain and suffering come to an end. Decisions must be made, you had confidence in me and my government, “he said.

“You made me your prime minister, I want to show you that we have confidence in you. And we want to listen to you, if you listen carefully to the message we gave in our election, we said it’s the people time, we live by those words and now it’s your time.”

The island is expected to get a significant boost in the coming months with the development of Lighthouse Point. The government is expected to make a decision this week on whether Disney Cruise Lines or the One Eleuthera foundation will be granted permission to develop the property.