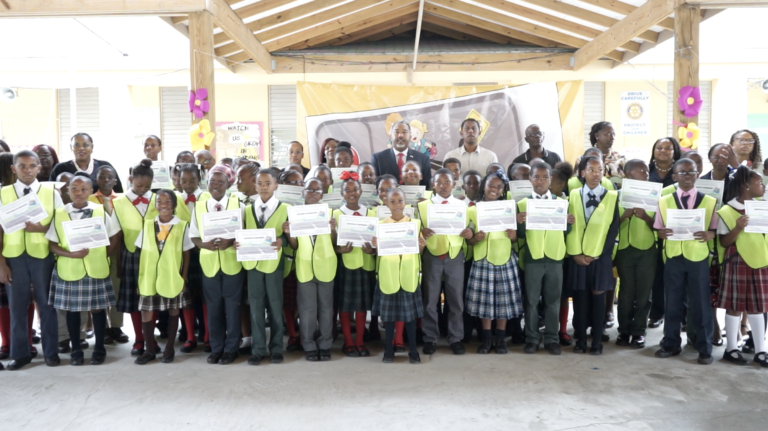 Minister of Transport and Local Government, Frankie Campbell (centre back) takes a photo with students and teachers of Columbus Primary School.

Once tasked with defending his nationality in Parliament, Transport and Local Government Minister Frankie Campbell has put his support behind government’s move to strengthen existing Immigration legislation.

Shortly after he was elected to office in May of last year, Campbell refuted claims that he was a Haitian national after admitting that he held two passports.

In Parliament Campbell declared that he was “As Bahamian as conch salad.” He explained that he was issued a diplomatic passport from serving in the Embassy in Haiti that he kept.

Although he grew up with his Haitian mother, Campbell confirmed that he was a Bahamian and called on anyone to challenge it.

Speaking to members of the media yesterday, Campbell said, government is moving in the right direction to tackle the mushrooming immigration problem.

“Our government is on the right, “Campbell said. “We are attacking it on multiple avenues, closing boards and regularizing persons who have a claim of right and we are looking to integrate persons.”

Campbell added that if successful, The Bahamas will be able to move away from “what seems to be two parallels.”

“Anything with a national implication has a shared responsibility. So, immigration is just among those issues that we all need to get involved with, to ensure that there are rules followed and weaknesses are amended.”

Government has drafted a new law as a supplement to the Immigration Act, which will be called The Unlawful Maritime Entry Bill.

This bill will place a specific legal duty upon any immigration officer to apprehend, and to remove from The Bahamas, the occupants of any maritime vessel or boat of any kind, who have entered Bahamian waters without having first landed and checked-in at a port of entry as required by law,  and whose purpose is to smuggle illegal migrants into The Bahamas or any other Country.

Government officials have explained that  no court proceedings of any kind will be required except, in cases where political refugee status can reasonably be claimed by any particular individual.

Persons of foreign nationality who are found in the vicinity of an illegally landed sloop or vessel, who cannot show any kind of documentary evidence of legal status or entitlement to be in The Bahamas, will under the proposed law, be liable to arrest and summary removal from The Bahamas.

The law will be modelled on similar provisions of Australian Law.

The Immigration Act will be amended to make it clear that the minister has a right to order the deportation of any illegal alien on the basis that their continued presence is undesirable, without the need to first obtain a court order.

Campbell said that these needed reforms will hopefully make it very clear that persons who unlawfully enter or remain in The Bahamas will truly find ‘swift justice’.