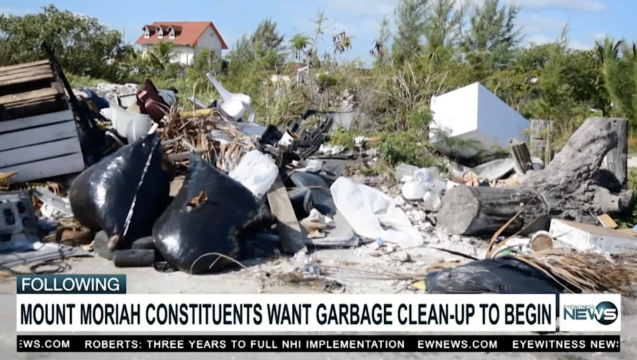 NASSAU, BAHAMAS – Residents in three neighboring communities in the Mount Moriah constituency have sounded the alarm on government’s refusal to clean up a dumping site, which sits adjacent to their communities, which they claim poses a number of health and safety hazards to the area.

This a story that Eyewitness News Online published in early March, but residents complained on Wednesday that it has been two months too long.

In 2016, the Christie-led administration declared that the plot of land, which sits just opposite of the Bahamas Hot Rod Association track, would be a designated dumping ground for debris in the wake of Hurricane Matthew.

A conversation with public works minister Desmond Bannister in March, indicated that the present government is seeking tenders for a company to clean up the area which has now become overrun with garbage and debris.

“This is no longer hurricane debris here, this is now appliances, cars, all types of garbage. There is a government agency that is responsible for environmental health and so we need them to come here and do their job,” said Samuel Strachan, a resident of Yellow Elder Gardens.

She underscored why the indiscriminate dumping poses huge safety and health hazards to surrounding communities.

“Because this isn’t being controlled, there are any number of things that can be dumped here that can cause damage to the underlying water table. Many refrigerators, stoves and other things have been dropped here and when they start decaying we don’t know what sorts of hazards they will pose,” she said.

“This dumpsite can house rodents and snakes, which can then infest the surrounding areas. In fact, Stapledon has had a huge rodent problem for several years now and it has been getting worse and this is probably one of the main reasons right here.”

Dr. Farquharson said while government is seeking a company to remediate the excessive waste, proactive measures need to be taken to address immediate concerns.

“For one, government needs to put up signs to direct persons to take their garbage to the public landfill rather than putting it here,” she said.

“Government has also spent millions of dollars on cameras. Government can put some of those cameras up, identify the persons that are coming here and enforce fines and prosecute them to the fullest extent of the law so that it can be discontinued.”

“There are residents who are willing and capable of doing it. Either you will do this clean-up for us or allow us, and provide us with the tools, to do so,” he asserted.

The public works minister told Eyewitness News Online in mid-March that government was in the process of finding a company to clean-up the eye sore.

He was unable to confirm how long the process would take.

“We’ve gotten our engineers to look at a proper scope of works. This means that they will go into this site and determine the amount of garbage that is in there and what it will take to be able to move it,” Bannister explained.

“Then they can make a determination when they put it out to tender or assign the work; then the contractors will be able to get a fair price for the work that they are to do.”