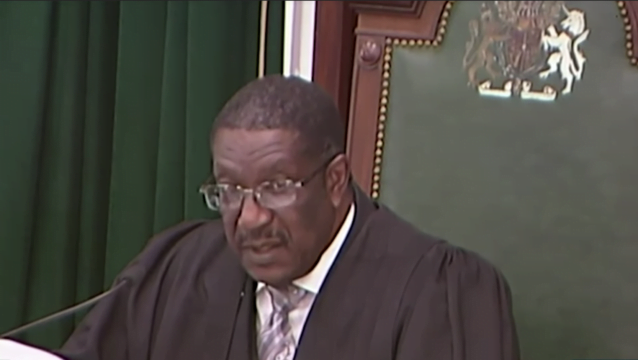 House Speaker bans “strangers” use of cellphones in HOA

NASSAU, BAHAMAS – Authorities have advanced their investigation into a disturbance in the House of Assembly last week, which led to the abrupt suspension of proceedings ahead of the budget communication.

Minutes into the morning sitting last Wednesday, Fontella Chipman, sister to Centreville MP Reece Chipman, made a loud outburst from the gallery of the House where she was sat, screamed at several parliamentarians and hurled several elastic bands that read “#ChipmanStrong’ on the floor in the protest.

As they escorted her out of the chamber, she shouted, “This system that you think you have in place will be removed.”

The outburst stemmed from a long-standing dispute over land.

In October 2018, the Centreville MP introduced a map in Parliament indicating that Tuckers Estate, between Tusculum and Orange Hill, was land that belonged to his family, a week after Minister of Tourism Dionisio D’Aguilar threatened legal action against a group he claimed took possession of a vacant lot next to his home.

Halson read section 25 of the Powers and Privileges Senate and House of Assembly Act which states that any person who creates or joins in any disturbance which interrupts or is likely to interrupt the proceedings of either Chamber or any committee while the Chamber or committee is sitting, shall be guilty of a crime and be liable, upon conviction, to a fine not exceeding $6,000 and/or imprisonment for a term not exceeding six months.

Any person who assaults, molests or obstructs any parliamentarian from coming to, being in or leaving from the Senate or House; assaults interferes with or resists any officers in either Chamber will be liable, upon conviction, to the same.

Moultrie reiterated that during any incident where a “stranger” of the Parliament disrupts proceedings, the House cameras should remain on the chair and not broadcast the incident.

Last Wednesday’s outburst was widely circulated on social media after the incident was recorded by a number of cellphone users in the gallery, including members of the media corp.

“…Nor should there have been any cellphone recording of the event that took place and that was distributed on social media,” he said.

“The reports that I have received based on that breach of the rules and the broadcast on social media has result in my estimation to a very serious threat on the security of the Parliament of the Commonwealth of The Bahamas and on its senators and members.

“As a consequence of that, the ruling of this chair with respect to cellphones are as follow: no stranger will be permitted to bring a cellphone in the chamber of this Parliament without first receiving permission from the speaker via the clerk of this Parliament.

“Technocrats of this government would be permitted to bring their cellphone into the chambers of the Parliament.

“Under no circumstance should any recording of the proceedings of this Parliament by cellphone be broadcast without first receiving clearance from the presiding officer of the Parliament.”