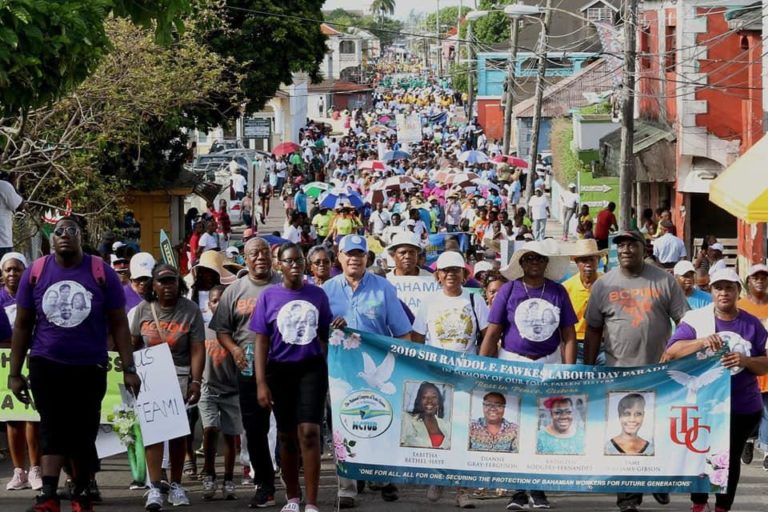 A scene from the 2019 Labour Day Parade.

Union to announce this morning whether or not it will comply

NASSAU, BAHAMAS — Ahead of what was expected to be a day of celebrations for Labour Day, police yesterday advised that no permission has been granted by the competent authority or the commissioner for any motorcade events to be held today.

Police encouraged the public to follow all COVID-19 protocols, warning that any person found in contravention of the COVID emergency order protocols will be cited.

Members of trade unions across the country were planning to gather for a motorcade parade starting at the Sports Center and ending at the Arawak Cay Fish Fry.

Party members from the Progressive Liberal Party (PLP) and Democratic National Alliance (DNA) were also expected to join them.

Obie Ferguson, president of the Trade Union Congress (TUC), told Eyewitness News the group did submit a request to the competent authority to receive permission for the event, however, they never received a response.

The motorcade would have replaced the annual events that were canceled as a result of the global coronavirus and emergency measures implemented by the government that enforce strict social distancing policies.

The 2020 march was also canceled due to COVID-19 concerns.

Ferguson said the group will make a statement on whether it will move forward with the event at the meeting site at 9am this morning.

PLP Chairman Fred Mitchell yesterday blasted the government for its decision not to allow motorcade events for Labour Day today, calling it “ridiculous”.

He underscored that the motorcade is in honor and support of the labor movement.

“It shows you again how the Minnis administration is completely lost in space, out of touch with reality, do not appreciate the history of our country, the importance of the day,” he said.

“They are just totally and absolutely clueless.”

Mitchell said PLP Leader Philip Brave Davis spoke with Prime Minister Dr Hubert Minnis yesterday and expressed his disagreement with the decision to deny the request at the eleventh hour, leading to last-minute changes to the planned event.

“He was also informed by the labor movement that threats were directly and deliberately made in person if the motorcade proceeded,” Mitchell said.

“The prime minister does not understand the lessons of history. Those who forget their history are doomed.

“All supporters should check with their local constituency candidate for further instructions.”

The DNA also expressed its disappointment in the changes to the parade, adding that its members too were not provided approval for a planned motorcade.

“It has come to our attention that both the competent authority and commissioner of police have not provided approval for the labor unions’ requested motorcade,” a statement by the party read.

“We note that the DNA also submitted a request to the competent authority and commissioner of police to have a motorcade in honor and celebration of Bahamian workers. Formal approval or denial of our request has not been granted up to this time.

“Consequently, the DNA has made the unfortunate decision to cancel its motorcade.”

The party added that it will continue to stand for and with Bahamian workers.