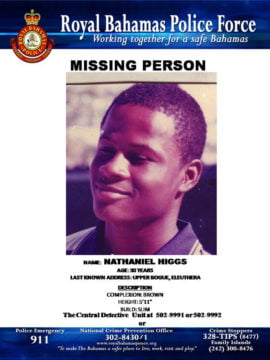 NASSAU, BAHAMAS – A mother of three pleaded Thursday for police and the public to continue their search for her 35-year-old son who has been missing now for almost five years.

Andrea Darling, 51, said her son, Nathaniel Higgs, disappeared nearly half a decade ago after accompanying a friend on a boating excursion to Eleuthera.

“I really don’t know what he might have gone out to sea for,” Darling said. “I know he did go, and he never returned, him nor the person he went with.”

Higgs often went out to sea to capture fish, therefore Darling said when her son left on August 10th, 2014, she never thought twice about questioning his safety, considering his experience.

“He’s always out to sea trying to find crawfish. He would bring me a couple back, so I know he was actually going back and forth in the sea.”

However, she was aware of his prior troubled history with law enforcement.

“He’s not the perfect child. He’s had incidents with the law. He had dealings where he was arrested.”

While she is not sure how much his criminal record would’ve affected his disappearance, she said it was very unusual to not receive a phone call from him telling her about his planned trip.

“He was a grown man and he would still consult with family as to his movements and where he would go. He didn’t communicate [with] anyone, so it just has me lost right now [and] very troubled because that’s not him.”

Although Darling has contacted police repeatedly regarding updates on the case, she said she has yet to hear about any changes.

“There haven’t been any breakthroughs [on the case] and it has me worried because it’s going toward five years.”

And even though Darling said she remains positive her son will be found soon, she said this experience has been painful.

“It’s really difficult for a mother to know that she has a child out there and she can’t hear from him. I don’t wish this on an enemy.”

Darling urged the public to come forward with any information they may have regarding her son.

“If you know anything, please call the police or reach out to the families because this is painful.”