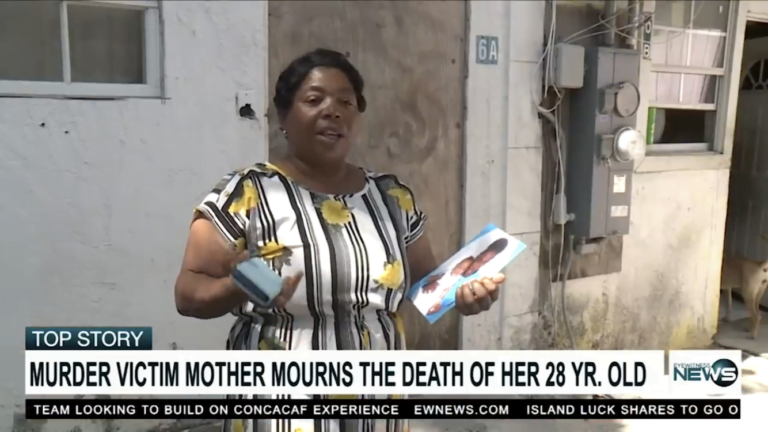 NASSAU, BAHAMAS – The mother of the country’s latest murder victim expressed on Monday that while her heart is full, she is not shocked that her son met his demise as he had been shot on two prior occasions.

“This is the third time [he was shot] said Gloria Ferguson, the mother of 28-year-old Anthony Ferguson, also known as Baby.

According to police reports, shortly after 10 a.m. on Sunday, officers responded to a shooting incident in the West Street area, where a male was shot multiple times.

Relatives rushed the victim to the hospital, but he was pronounced dead a short time later.

Yesterday,  the victim’s mother told Eyewitness News that sometime around 10:00 a.m. on Sunday, she was home with other family members when she heard three gunshots.

Ferguson said she called the names of all of her children, to ensure that they were at home. But she soon realized, however, that Anthony was not there.

“When we looked, he wasn’t in here so all of them ran out… and my little son came running back saying, ‘that’s Baby who they shoot,”’ the mother recalled.

Ferguson surmised that ‘persons’ may have been targeting her son since his release on bail, after being charged with attempted murder.

“They charged my son and say he murdered another person, but he was shot and they never charged the person who shot him, so I believe they wanted him dead.”

Ferguson said when her son was released on bail, he was never at peace, but would always tell others that, “God has him”,  especially when he was leaving home.

According to Ferguson, one must bother with her son for him to retaliate as he hardly speaks to others.

Asked how she was coping as of yesterday, Ferguson said it was not easy.

“He is not a troubled person, he is not in a gang and that is what hurt me. The night before he died I said, ‘Baby come man, let’s go inside’ but he said, ‘mum I ain’t scared of no-one, God get me,” said Ferguson fighting back tears.

Ferguson recalled that when her son died on Sunday, she stood over him at the hospital, rubbed his head and told him that he doesn’t have to worry anymore about court appearances or any pressure from others as he was finally in the hands of God.