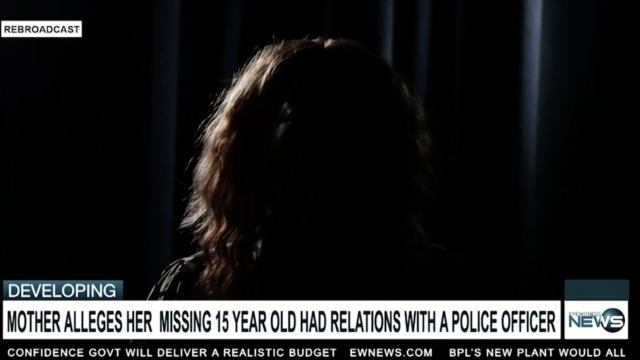 NASSAU, BAHAMAS – Police are said to be actively investigating claims that an officer of the law allegedly had sexual relations with a teen minor.

The mother, whose name has been withheld to protect the identity of her 15-year-old child,told Eyewitness News Online that her daughter ran away from home  on Tuesday because she disapproved of the unlawful relationship.

She said she believes that the officer in question allegedly had a  sexual relationship with her daughter for a three-month period.

The mother also claimed that she reported the matter to police on numerous occasions, but failed to get a response, and the officer continues to work from his post that is near to her home.

“I am a snoopy mother and I found a phone that he bought my daughter. There were messages in the phone and videos describing all kinds of nasty things between them two,” the mother alleged. “I took all of that along with the notes that I found that he wrote to her to the Central Detective Unit and they have yet to act. Everyone is saying it’s a process but it has been three months now.”

The distraught mother further revealed that when she went to her daughter’s room on Tuesday morning, the window screen was missing and her daughter was gone.

“It’s not the first time she has ran away from home and I think this man is putting a lot of things in her head.  She is a good student… she hasn’t been skipping no classes, but I feel like she is acting one way in school and is a completely different person at home.”

Eyewitness News Online contacted police officials who confirmed that the matter was reported to police and an active investigation has been launched. However, no comment was given as to why an investigation was not launched when the initial complaint was made.

Meanwhile, the mother of the 15-year-old has failed to file a missing child’s report, with the hope that her daughter would come home soon.

“This is very hurtful for me to watch this man every day near our home carry out his duties, knowing that we have made several complaints and nothing is happening,” the mother said.

“The police need to act now. How can the police investigate themselves and there seems to be no accountability, ” the mother questioned.