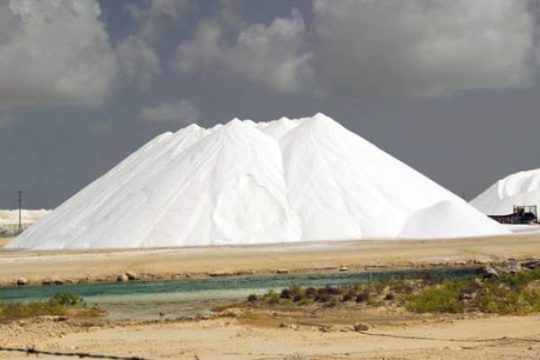 Says the union has 15 days to reach a ‘happy medium’

NASSAU, BAHAMAS – Having remained at an impasse following its most recent counter-proposal for a salary increase, the Inagua-based Morton Salt Company Limited on Tuesday threatened to lock employees out of the plant if a “happy medium” of negotiations is not achieved with members of the Bahamas Industrial Manufacturers and Allied Workers Union (BIMAWU) within the next 15 days.

“Failing such a response or the arrival to a happy medium between the parties, the Company intends to proceed with its lockout at the expiry of 15 days from the date of this letter,” said Morton salt in a three-page letter issued yesterday.

The letter, dated June 18, 2019, was signed by Christoper Getaz and was issued to Jennifer Brown, president of the BIMAWU.

Since last year, the BIMAWU has been negotiating for an increase in salary in a new industrial agreement, and despite having a strike certificate in its possession, the Morton Salt company has not budged in offering an increase of more than 1.5 percent in its counter-proposal – a move the union has referred to on more than one occasion as a ‘slap in the face’.

The Union is seeking an increase between four and eight percent.

Yesterday’s letter issued to the BIMAWU president outlined that notwithstanding an agreement made between the Company and executives of BIMAWU, as it relates to convenient dates to resume negotiations, Brown and other union representatives failed to attend negotiations at the Labour Board on Tuesday, June 11 and Wednesday, June 12, 2019.

Morton Salt said the Company has determined that this non-attendance was a clear flouting of not only the process agreed upon by the parties, but more gravely the “good officers” of the Conciliator at the Labour Board.

Morton Salt said the Company is of the view that this consistent, non-cooperative behavior by the BIMAWU does not represent a commitment on its part to negotiate in good faith.

“Conversely, at all times, the Company in good faith and at great expense made appropriate arrangements to coordinate travel and accommodation of its representatives to attend to the resumption of contract negotiations as agreed,” the Company said.

Morton Salt said in addition to the union’s failure and or refusal to attend to agreed negotiations, the BIMAWU has also rejected the Company’s counter-proposal for a new Industrial Agreement without presenting a counter-proposal, while making it clear that it did not intend to resume negotiations with the Company in good faith or at all.

The Morton Salt letter also noted that its offer of a 1.5 per cent salary increase, which was enclosed in an email issued to Jennifer Brown on June 13, 2019 represents the Company’s best and final offer and the Company was not in a position to make further offers.

“As such, the Company has no alternative other than to perceive the parties as having arrived at an impasse,” Morton Salt said.

“Further, the Company is unable to ignore the strike certificate which BIMAWU has in its possession; the industrial action threatened by the BIMAWU in support of its bargaining objectives and or the refusal of the BIMAWU to de-escalate the current affairs by publicly dispelling the perception or notion of its intended industrial action.”

The  Company said it is also aware of industrial action activities which have occurred and/or are occurring at the Inagua plant by or under the direction of BIMAWU.

According to Morton Salt, such activities led to work disruptions which affected production and the economic viability of the Plant. As a result of this, Morton Salt said they were led to consider whether, in the declared industrial action climate, if it is necessary for the Company to lock employees out of the Plant in furtherance of the Company’s bargaining objectives in negotiations for a new Industrial Agreement.

Last night, Jennifer Brown, president of the BIMAWU told Eyewitness News Online in a telephone interview that if employees are locked out, the union will take legal action.

Brown said union reps opted not to attend the last negotiating meetings held June 11-14, because having received a counter-proposal from Morton Salt, it was realized that the a 1.5 percent increase was still being offered.

“We opted not to go to the meeting because we did not think the meeting would be fruitful,” Brown said.

According to Brown, the issues faced at Morton Salt is the result of “bad management decisions” and management at the salt plant are seeking to blame employees.

Brown said Morton Salt has an issue with the union taking their concerns to the media, but she said last night that they will continue to “expose” any issues or concerns that the union is facing.

“They want to treat the workers however they see fit and we are just supposed to keep it in Inagua, but we are tired of doing that…we are tired.

“They just need to give the workers what is due to them and everything will be fine.

Asked last night why the union would not use its strike certificate, Brown responded, “We don’t’ want to waste it because we have had a strike before. We’ve had a two-week strike and the minister of labour had us sign and said this [impasse] would be resolved, but all of those issues since then are still not resolved.

“This time, the minister is not even stepping in.”