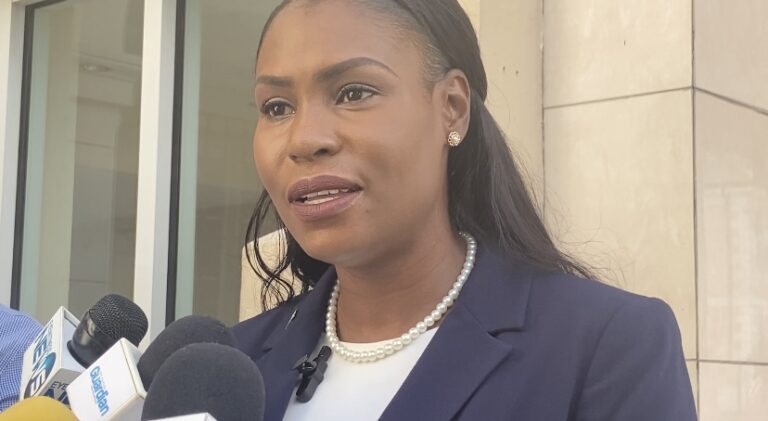 Minister of State for Public Service Pia Glover-Rolle speaks to reporters outside Cabinet on Tuesday.

NASSAU, BAHAMAS — Minister of State for Public Service Pia Glover-Rolle said yesterday that the government continues to review the promotions and hiring of more than 500 workers in the six to eight weeks leading up to the General Election.

Speaking to reporters on the matter outside the Cabinet, Glover-Rolle noted that there were hundreds of promotions dolled out by the Minnis administration before the September 16 polls.

“I’m working very hard to make sure the assessments are done in a fair time because obviously, persons are waiting,” she said.

Among those departments to be impacted, the Water and Sewerage Corporation (WSC) has placed a hold on all promotions that were effective September 1 until further review.

Minister of Foreign Affairs and Public Service Fred Mitchell has said that public sector promotions have been held out of “an abundance of caution” due to the manner in which they were issued.

“We are not doing anything peculiar. In any new administration, we would assess what is taking place, especially what has taken place in the last six to eight weeks…I’m making assessments in the shortest possible time.”

She noted that those probes are being done in consultation with other ministries where those moves were taken.

“We are very conscious of everybody that’s involved in the process and ensuring that we do what we can in a fair way and in the shortest possible period.”

Glover-Rolle noted that there were hundreds of more promotions that were held up over the years that are now being reviewed as well.

“It’s not only going to be a process of ensuring that the backlog is handled but we are going to look to make the process smoother in the future,” she added.

“….People put in the work in the public service, so we want to make sure that we are duly compensating them and providing the rewards that are necessary.”

She could not give a timeline on when that review will be complete.

I dont know why the new government has chosen to waste time on this matter. Whatever they do when the FNM comes back in 5yrs they will rescind anyway. These proceedings are waste of time and the people’s money.

@ C. Bain I totally agree with you.