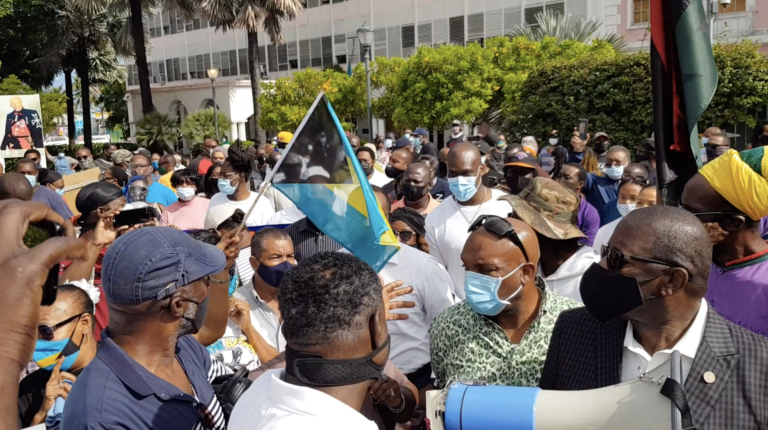 NASSAU, BAHAMAS — More than 200 supporters of Bahamian Evolution and a coalition of organizations agitating for change over The Bahamas’ natural resources flooded Rawson Square yesterday morning to demand a “peaceful revolution”.

Leaders of the Democratic National Alliance (DNA) and dozens of their supporters joined the group, though there were a few who suggested the party’s presence was political expedience.

Lincoln Bain, of Bahamian Evolution, said: “We are disappointed in those who have led us for so many years. To all of those who have led [who] are in the House today [and] under the sound of my voice: we trusted you, we believed in you, we loved you, but you did us wrong.

“And today, we have come to right the wrong.

“Today, we have come to take what we have entrusted to you back because it is ours.”

Bain handed the Ocean Industries Incorporated (Aragonite Mining Encouragement) (Repeal) Bill to Pineridge MP Frederick McAlpine, who is expected to table the proposed legislation in the House of Assembly within a week.

Centreville MP Reece Chipman is expected to second the bill.

He asserted the existing act has allowed foreigners to take advantage of the natural resources of The Bahamas, while discouraging Bahamians from their birthright.

He said the group supports mining for aragonite, but Bahamians must benefit.

According to Bain, the Bahamian people can no longer wait for the government to introduce laws that benefit the citizenry and must take matters into their own hands.

He said: “We’re not going to wait for election for them to promise us they are going to give us this bill or that bill. Those days are over. This generation of the Bahamian people know our rights. And so, now we are going to table bills in the House of Assembly.”

McAlpine said he was honored to introduce the bill in Parliament and looks forward to repealing the existing act, so the “Bahamian people can benefit as they should from the natural resources in the Commonwealth of The Bahamas”.

Bain said Bahamians should watch carefully as to whether the government blocks the bill or who votes against it.

While organizers encouraged the large crowd to spread out on several occasions, supporters were tightly packed together during the majority of the demonstration.

The large crowd eventually marched around the perimeter of Parliament Square before dispersing.

During the demonstration, Bishop Walter Hanchell, of Citizens for Justice, said for too long the Bahamian people have been oppressed, but “that day has ended”.

He called for a peaceful revolution.

Holding up the constitution, Bahamas Constitution Party (BCP) Servant Leader Ali McIntosh said her party supports the movement and while it may not “do the showboating, we are committed to the work”.

Priest Rithmond McKenney of the Rastafarian community said: “For a very long time, the Rastaman was saying ‘give us our natural resources, give us our justice; purge us from colonialism and imperialism’.