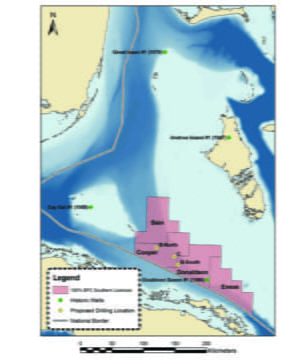 NASSAU, BAHAMAS – Environment Minister Romauld Ferreira yesterday said while the government is not “enthusiastic” about oil exploration in the country, he could not commit that no other licenses will be granted.

His comments come as Bahamas Petroleum Company (BPC) moves forward with plans to drill exploratory oil wells before the end of 2020.

The company advised in February that it received formal notification from the government to proceed.

BPC was initially granted the license for exploratory oil drilling in 2007 and subsequently got two renewals under the Christie administration.

Attorney General Carl Bethel has said the government was legally obligated to extend that license.

In an interview with Eyewitness News, Ferreira maintained the government’s decision to approve the project is largely due to obligation.

Asked whether the government would grant additional licenses for oil drilling, Ferreira said, “It depends on the circumstances.

“We have taken the position that we are not enthusiastic about off shore exploration wells, but at the same time I think that has to be kind of balanced with the position as to whether or not we want to establish that this natural resource is there.

“We should take it one step at a time and the first thing we need to determine is whether or not these resources are there, and we have not been able to confirm that thus far.”

Ferreira noted that despite the risks of oil drilling, it could be an equal tradeoff for the country.

“I think that’s a reasonable proposition,” he said.

“First of all, they haven’t discovered oil, so you don’t know what the implications of finding oil is going to be if they haven’t found it.

“…The broader question is, do we want to explore the fact that we may have oil.”

BPC has stated previously that its drill rig ship will be stationed 15 miles off the Maritime Border with Cuba.

Always a headline ahead, Bahamas, ewnews.com