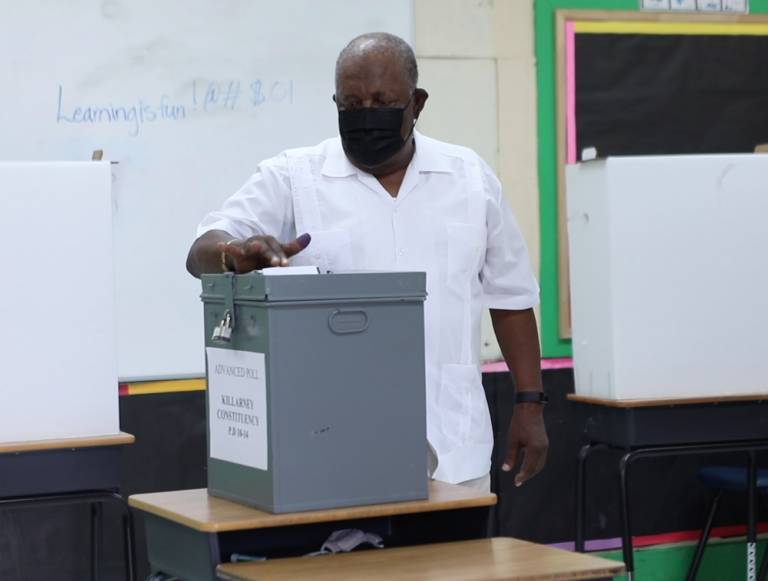 NASSAU, BAHAMAS — Former Prime Minister Dr Hubert Ingraham yesterday said that more could be done to ensure a better flow of voters at the polls amid ongoing concerns of COVID-19 in the country.

After being initially turned away from casting their ballots at the Gambier Primary School polling stations, Ingraham and his wife returned around 4pm to cast their ballot in the advance polls.

Ingraham told reporters that after being turned away from two stations, he was contacted by the parliamentary commissioner who apologized for the error and advised that they were in fact on the early voter’s list.

Ingraham explained that he returned because he didn’t want any confusion with his vote.

“It was very important to come back to vote today because if your name is on the list for today and you don’t vote today, they will have to take your cards, your counterfoil, put it back in the register for next week, and put your name back on the register,” he said.

“There are lots of opportunities for errors to be made if that happens and so I thought it best advisable to do it today so there was no confusion of my vote.”

Thousands of early voters gathered on New Providence and Grand Bahama yesterday to mark their X for the next government but were met with a myriad of procedural issues in sweltering heat that frustrated the process even well after the last polls closed at 6:30pm.

When asked about his thoughts on yesterday’s poll, Ingraham said he could only speak to his personal experience which was an error that was rectified.

Chaos erupted at several of the stations with hundreds of people crowding in large groups, reigniting concerns of the possibility of spread in COVID-19 infections amidst an ongoing surge in the country and the confirmation of the Delta Variant as the predominant strain of the virus in the country.

Ingraham noted that he understood how people voting could be concerned and urged voters to come out and vote but do so as safely as possible.

“I saw a number of photographs earlier today where there was no social distancing,” he said.

“I think that the authorities ought to do a better job and ensuring that there is social distancing, that there are adequate polling stations so that large numbers of people do not be crowded at one place, that there are people who are outside to [direct voters].

“…I think there is much that could be done to be done to improve the flow of voters if authorities were to take those steps.”

The former prime minister was not the only person to have an issue with not being listed yesterday as other voters reported that they were turned away from voting for the same reason.

DaQuan Swain, independent candidate for West Grand Bahama and Bimini said he felt disenfranchised after only one of the 15 poll workers he submitted to cast their ballots in the early polls were not allowed to vote, despite all having been registered.

Swain said now those workers will have to vote on September 16, instead of assisting him in the polls on election day.