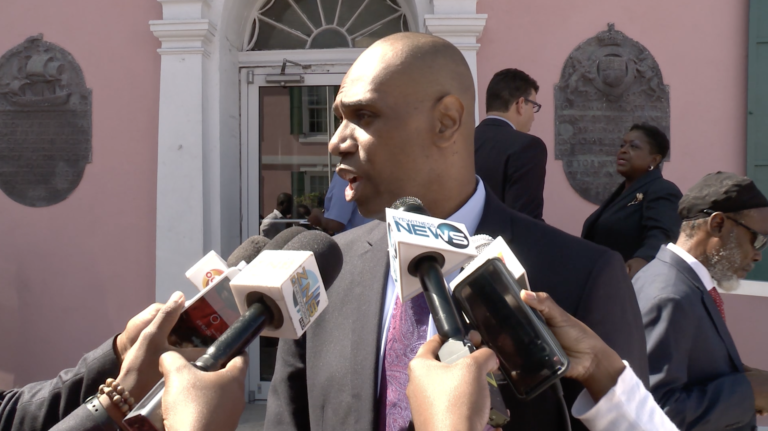 NASSAU, BAHAMAS – Free National Movement (FNM) founding member Maurice Moore suggested yesterday that it is time for Pineridge MP Frederick McAlpine to decide whether he wants to help the mandate of the FNM, the banner under which he was elected, or step out and lead on his own.

“It takes leaders to lead and to build programs, and to show where you are going, and how you are going to get [there]; not having hurrah… and having conversations out on the streets, and talking about popularity,” Moore said.

“He wants to see popularity? Well, if he feels that he is doing so well then, he should politely take himself and move himself from these guys who he says don’t know what they’re doing or don’t know where they’re going.

“[If] he knows where he is going, then step out front and say ‘I know where I am going, to hell with you all; this is where I feel…the country should go’ and he’ll find out soon enough.

“He was elected under the banner of the FNM and the FNM is now putting forth a program to the country that the average person can understand where we are going and how we choose to get there. Now, if he doesn’t see it that way he may go his way.”

Moore’s comments came a day after McAlpine accused the Minnis administration of being hypocritical for going contrary on a number of key issues it had previously opposed.

McAlpine was responding to FNM Chairman Carl Culmer who asserted that the Pineridge MP was a hypocrite for supporting a protest against the Minnis administration last Wednesday.

At one point, the protestors broke through the barricades that were erected around Parliament Square.

The demonstrators expressed concerns over increased taxes, the Oban Energies deal, and the increased cost of power, among others issues.

McAlpine was among the protestors.

He said he was not anti-Minnis or anti-government, but pro-Bahamians.

“If standing up for the people makes me a rebel then so be it, but I am for people,” said

McAlpine, as he encouraged protestors to continue to agitate and stand up for their rights.

The FNM MP said Sunday that he remains an FNM.

However, he noted that if he was forced to choose between the party and the country, he would choose the country and the people every time.

Culmer has dismissed the march, calling it a failed PLP event.

Yesterday, Moore said while some of the issues expressed last Wednesday were genuine concerns held among the public, he does not believe they deserved protest as the government is working to address them and “ease the pressure on those who can scarcely bear it”.

To the Pineridge MP, Moore declared, “This is not McAlpine’s party.

“The FNM belongs to the Free National Movement and its members who are dedicated and sincere to the purpose — those who support the programs the FNM has now established to go forward and to prepare The Bahamas for a [more sound] future.

“What McAlpine needs to do is decide whether or not he believes in the approach the FNM has taken. Nothing that he says or does is going to change the Free National Movement from carrying out its program for putting The Bahamas on a firm financial basis…”

He added, “We’re interested in doing what is best for the country and that is what McAlpine was elected to do, but he chose to be a critic of the government. Well, let him go ahead and take that route if that’s where he wants to go.”

Moore added that despite McAlpine’s frequent criticisms, he does not present a problem to the FNM.

Unbelievable. This can’t be the same Maurice Moore who himself was bewildered at the direction the FNM was leading the country. The same Moore who broke down in tears concerning the sloth like manner in which his party is governing. Who really is the hypocrite here.