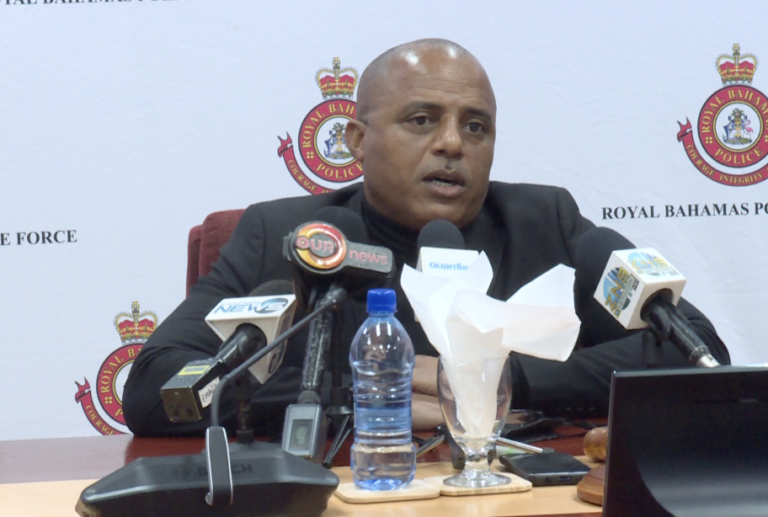 Police commissioner pledges all out man-hunt for killers

NASSAU, BAHAMAS — Minister of National Security Marvin Dames last night labeled the individuals responsible for the murders of six men and the shooting of a 19-year-old mother and her two-year-old daughter as “monsters”.

“These are the monsters that we would have raised; nobodies kids but ours,” Dames said during a press conference at Police Headquarters hours after the shooting.

“We have brought them into this world, okay. And the commissioner is 1,000 percent correct.

“It is time now for us to play respective roles as parents, as family members.

“For many of us we know exactly what is going on.

“These individuals live with us; they sometimes conceal their weapons on our property.

“We have an idea as to what they are engaged in and it is a problem.

“When you put a weapon, an assault rifle at that in the hands of an inexperienced child, this is often the end results of that.”

He continued: “This tragic incident is certainly unprecedented.

The mother and daughter remain in critical condition in hospital.

Dames said he prays for their recovery.

As he assured that those responsible will be brought to justice, Dames strongly appealed to anyone with information to come forward.

“We will not sit back and allow our nation to be overrun by a group of misfits,” he added.

“We’re still a nation of laws and we will see to it that those who are responsible are brought to justice in the quickest possible time.

“And all of those out there who may be covering for them, too will face the consequences of their actions.

“We cannot afford to have incidents like this in a nation as small as ours. It can’t happen and it won’t happen.”

According to police, officers responded to reports on gunshots on Jerome Avenue and Chesapeake Road and found six men with gunshot injuries — two on the outside of the silver Honda Inspire and four who were still sitting in the vehicle.

Each of the victims had multiple gunshot wounds.

Assistant Commissioner Solomon Cash said it is believed that four men, two of whom were armed with high-powered weapons and the other two with firearms exited a white Kia Jeep and opened fire on the Honda.

Eyewitness News understands several of the victims were detained in relation to a firearm on Monday and released yesterday.

Commissioner of Police Paul Rolle said effective immediately an incident room has been established at the Central Detective Unit for residents to contact police about the shooting on 502-9929/35/42/52.

He also said a special operation will move throughout the various communities of New Providence in search of the men.

“We understand that these individuals may have been involved with these rival groups, but we want to make sure there is going to be no retaliation.

“We are not going to allow that tonight, or tomorrow or the following days onward.

“We will establish a formidable presence to ensure that every household, every member of this city of New Providence remains safe until we find these individuals and bring them to justice.”

“We are following some leads with that,” he said.

Asked if the mass shooting was one of the deadliest in Bahamian history, Rolle said: “I would think so. We have never had any incident of this level where you have six persons die. We have had multiple shooting incidents where there were multiple persons were shot, but I think this one is the worst in history where you had six persons killed.”

Responding to widespread speculation that authorities leaked the whereabouts of the victims following their release from custody, Rolle said: “That is not true. What we know is; we don’t at which point these persons followed these persons in the vehicle. Obviously, they were pointed out to them and this was sometime after they were released from custody.”

There have been 39 murders for the year, according to the commissioner.

The commissioner and minister offered condolences with lost loved ones and those who experienced loved ones who had to be hospitalized.