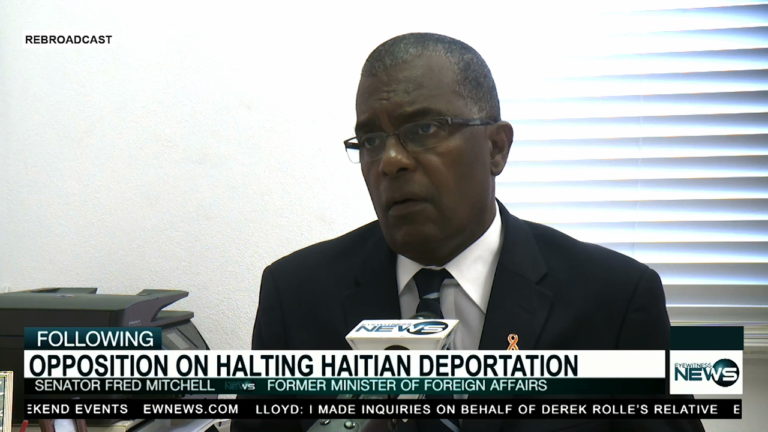 NASSAU, BAHAMAS –  Progressive Liberal Party chairman and former minister of foreign affairs, Senator Fred Mitchell, on Monday weighed in on the government’s decision to put a temporary freeze on the deportation of Haitian nationals.

A statement released Saturday from the Office of the Prime Minister outlined that due to political unrest and violence in Port-au-Prince, Haiti, the Government has temporarily ceased all deportations to that impoverished country.

The government said the decision follows the temporary closure of The Bahamas Embassy in Port-au-Prince and the recall of all diplomatic and consular staff.

While in agreement with this policy, Mitchell told Eyewitness News Online that the necessary precautions must be taken to ease the minds of Bahamians if repatriations are halted.

“The Bahamian public is panicked by this, and so you have to be sure that the security interest is taken care of, and that these people are properly detained when they are here [in The Bahamas],” Mitchell said.

As a protective measure, the government also announced in its issued statement that they are preparing a temporary detention centre in Matthew Town, Inagua, which will be staffed with personnel from relevant ministries and government agencies to deal with any resultant eventualities.

Yesterday, Mitchell suggested that a detention centre could be built in Inauga as there is more than enough property on the island to make this a reality. He added, however, that it is a must that it be properly developed with sufficient staff and support from social services, especially if children are being detained.

The former foreign affairs minister also noted that when migrants are detained in Inagua, residents on the island must be protected from breakouts and must have access to proper healthcare.

“I just hope that the government has taken sufficient care to be sure that all of these are in place before they start to place this mechanism [of a temporary detention centre] in Inagua,” Mitchell said.

“The problem with The Bahamas is that all of these are temporary solutions that eventually become long term, and that’s the thing that becomes frightening.”

Mitchell also outlined a number of issues that may be stagnating the immigration process.

“…We keep hearing all these reports about deficiencies in the Defence Force and the boats not being operational,” Mitchell said, adding that there also appears to be an issue with intelligence operations as a large number of Haitian boats have made their way to The Bahamas undetected.

Mitchell also expressed his belief that the Department of Immigration is lacking staff.

He said the former administration tried to resolve this issue by raising the number of employees from 300 to 900.