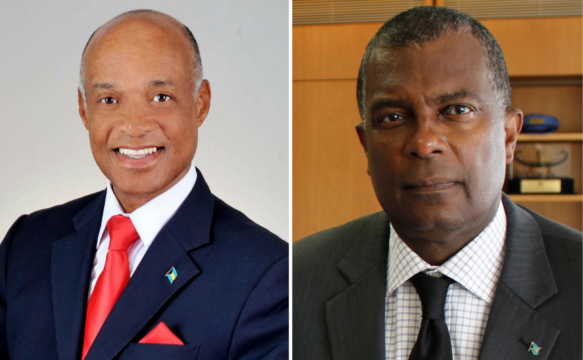 Minister of Education Jeff Lloyd minced no words Tuesday as he responded to claims made by Progressive Liberal Party (PLP) Chairman Fred Mitchell, who suggested that his ministry refused to approve a generous donation from a private citizen for infrastructural upgrades to educational facilities in Fox Hill.

“Lies, absolute pure lies, lies,” according to Lloyd who said, “It’s nonsense. Foolishness. Let’s call it for what it is.”

He said, “Anybody who wants to make a donation to the Ministry of Education, must come through the minister of education. If there is any approval for any building to be done, it must come across the minister’s desk and I haven’t seen any.”

Mitchell, in a press statement Sunday said, “The Ministry of Education must explain why it has not approved the generous offer of a private citizen to design and build a brand-new administration building for the Sandilands Primary School in Fox Hill. That citizen had also agreed simultaneously to retrofit the existing administration building to accommodate a 40-child preschool.

“The need for the preschool is critical and since we have this generous offer outstanding, the ministry must respond.”

Both Lloyd and Mitchell have refrained from releasing the identity of the private donor.

“I believe the person or company that he (Mitchell) is talking about, I had a conversation with them Monday as we flew in from Miami. They made me to understand that the previous (PLP) administration are the ones who failed to follow up on opportunities for the building of the preschool,” he revealed.

But Mitchell has suggested otherwise.

“When we lost office, the plans were before the previous minister. I brought the fact of those plans before the present minister. Almost a year has gone by since the general election and not one nail has knocked,” Mitchell said.

Visibly bothered by Mitchell’s assertions, Lloyd pleaded with the PLP Chairman to not mislead Bahamians.

“This is my friend of over 50 years. The honorable Fred Mitchell and I go back decades. Come to me if you want to share what you feel is best for education, but do not misrepresent to the Bahamian people because it is not true. Pure lies,” he exclaimed.