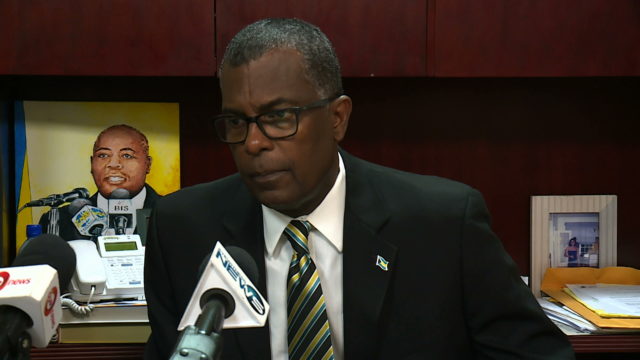 NASSAU, BAHAMAS – In an impassioned plea in the Upper Chamber, Progressive Liberal Party (PLP) Senator Fred Mitchell yesterday called on legislators to consider a further amendment to the Road Traffic Amendment Bill, 2019, that would provide stiffer penalties for motorists convicted of killing during the course of dangerous driving.

Mitchell said while the opposition broadly supports the legislative amendments proposed, there have been too many deaths as a result of motorists driving dangerously, and the fines imposed must reflect the “seriousness of this matter”.

He also suggested new provisions, which would revoke the license of the offender upon conviction to a lifetime ban and order compensation to the victim’s estate for the loss of life on the principles of civil law.

“The penalty is not commensurate with what actually occurred and I’d like to offer an amendment which would reflect what is the seriousness of this matter…,” Mitchell said.

The amendments proposed by the opposition were put to vote, but were unsuccessful.

While contributing to debate on the bill in the Senate, Mitchell read the victim impact statement and petition of Regina Smith, whose father was killed on John F. Kennedy Drive in December 2012.

A female motorist driving on the highway attempted to overtake two vehicles, including Smith, who was driving a pick-up truck, when she lost control and ran into bushes near lake Cunningham, according to authorities.

The driver swung left to regain position on the road but, rear-wheeled Smith in the process.

His pickup truck flipped several times and he was ejected from the vehicle.

He died upon arrival at the hospital.

The woman, who was unlicensed and uninsured, was charged with killing in the course of dangerous driving in April 2013, and fined $6,000, as well as ordered to attend counseling sessions.

Smith’s petition on www.change.org for a revision of the law relating to killing in the course of dangerous driving received nearly 750 signatures.

Mitchell recalled several more examples of motorists and pedestrians killed, and the fines imposed on the driver responsible amounting to a few thousand dollars.

The proposed legislation seeks to criminalize the use of cellphones while driving and having open alcoholic beverages in a motor vehicle.

It would also make the failure of driver to produce his or her name and address; the name and address of the owner of the vehicle or certificate of insurance relating to that vehicle, a criminal offence.

During debate, Attorney General Carl Bethel asserted that a motorist using their phone while driving is an “incapacitated as someone blind drunk”.

“If you are texting and driving you might as well be blind drug; utterly incapable of any function,” he said.

“It is a death sentence.

“There are so many persons around the world and here in The Bahamas who have had serious accidents or worse while texting.

“So, it really behooves the government; in behooves us as legislators to do what we can do to in a sense set the rule and standard in law.

“It is common sense, don’t text while driving. Quite frankly, in that moment, we all do it.

“You’re little WhatsApp pings and it something nice and juicy or it is an important message and you trying to drive and look like this (mimics glancing at phone).”

Bethel said further amendments to the bill are expected to reduce the dollar of value on a number of penalties, which were thought in hindsight to be “a bit high”.

“Those amendments were made in the House [of Assembly] and we will also make them here so we have the same bill, and then it can be brought into force,” he said.

How about stiffer penalties for reckless driving, running red lights, pulling out /reversing in front of vehicles on main roads? Driving without licences? Texting and driving? Sounds like a blanket way to get the same result while preserving the sanity of a country full of selfish drivers