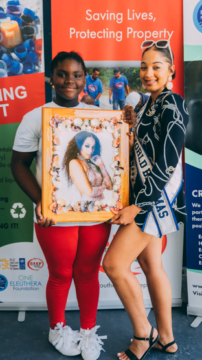 NASSAU, BAHAMAS — When Nyah Bandelier was crowned in May as Miss World Bahamas 2019, she made a commitment promote her platform of the eradication of plastic pollution throughout the Bahamas.  So it was only fitting that her first stop would be the Family Island for which she carried the banner in the national competition – Eleuthera – The Island of Freedom.  She was welcomed to the island of her heritage by the One Eluethera Foundation – a group involved in a number of environmental and conservation programs.

National flag carrier and sponsor of the Miss World Bahamas Pageant Bahamasair flew the 19 year beauty and her entourage into Rock Sound where she was whisked off to the Retreat at the Center for Training and Innovation (CTI), formally the Rock Sound Club which once housed some of the wealthiest and most famous faces of the 50’s & 60’s. A project is underway to restore the property in an environmentally safe and energy efficient way. Nyah toured the property’s farm, solar panel complex, extensive property restoration and student training activities.

“Seeing the great work at the Center for Training and Innovation gave me hope that we are capable of building great hotel properties in harmony with nature,” she said.   “I was so impressed by the work done by the students there, and inspired by the possibilities of the future.”

After brief remarks thanking them for their hospitality and encouraging the children to continue to preserve the environment, she was presented with a number of gifts, including handmade jewelry, a monogramed straw basket, an official One Eleuthera Foundation pin, and frame photograph embellished with local seashells – created by the students of the summer camp. Nyah was visibly moved by the gesture.

“The gifts were especially thoughtful and creative,” she said.  “I was so moved by the portrait.  The kids clearly put a lot of time and effort into it.  It’s the kind of thing you never forget.”

A demonstration of a glass crushing machine on the site gave the queen an actual feel for how the recycling project is working.  She committed to providing assistance in efforts to raise funds for a machine to convert plastic waste into useful material as part of her ongoing Beauty with a Purpose project.

Next up, a visit to the Island School where she got to view the many projects underway to recycle and reuse waste, a pig farm and hydroponics farm – among other things. A trek to the controversial Lighthouse Point provided breathtaking views of the pristine beach, cliff views and old lighthouse.  The property was recently granted to Disney for a major development, despite protests and an offer from The One Eluethera Foundation.  Although she is a queen admired for her beauty, Nyah was taken aback by the natural beauty of the site.

Later, that evening Miss World Bahamas along with One Eleuthera Foundation CEO Shawn Ingraham officially opened The Tea Room at the Retreat.  The restaurant, to be run wholly by student employees, will serve a variety of native cuisine.

The next day it was off to a tour of the Leon Levy Native Plant Preserve for a hike through the park of an array of flora and fauna kept by the Bahamas National Trust. Nyah’s tour of Eleuthera took her far north to the world-famous glass window bridge where she was photographed for and upcoming edition of The Eleutheran Magazine.  She describes her Eleutheran encounter as one she will never forget.

“This is the island of my heritage, and it was truly a great experience visiting Eleuthera, as Miss World Bahamas.  I’ve always known the island to have great natural beauty and warm friendly people, but carrying the title made it that much more special,” she said.  “I am grateful to the One Eleuthera Foundation for inviting me here and being such a fantastic host.  It certainly gave me greater insight into all of the wonderful environmentally sound programs underway here. I can’t thank them enough.