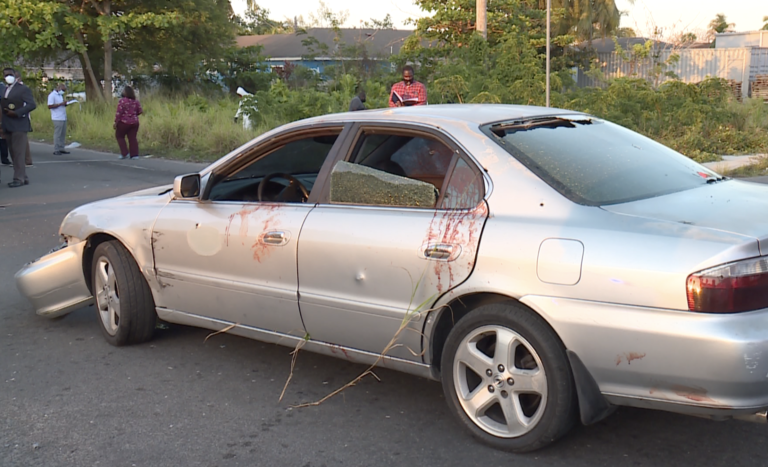 A photo of the bloodied car that six men, a woman and a little girl were in on Jerome Avenue when they were shot on Thursday, April 15, 2021.

NASSAU, BAHAMAS – Commissioner of Police Paul Rolle said yesterday that the six men who were killed in a mass shooting on Jerome Avenue on Thursday were released from police custody after another man, who was detained along with them over a firearm, confessed that the gun belonged to him.

He was responding to questions from Eyewitness News amid suggestions from some quarters of the public that authorities released the victims and tipped off about their release — an assertion the commissioner said he was concerned about and called misinformation.

To the assertion, Rolle said: “Our hearts go out to the families for their loss.

“The police are concerned for the level of misinformation being perpetrated by persons making unsubstantiated assertions.

“The police are concerned to establish the identities of those responsible for this terrible tragedy.

“There is no information to suggest that the police were in any way involved in this shooting and if persons have information as to who may be responsible, we ask them to provide information to the police, so that we can have answers for the families.

“The individuals were released from custody on an unrelated matter approximately two hours prior to the shooting incident and we are checking all surveillance cameras to try and determine their movement after being released.”

When asked why the men were released if they were detained for firearm possession, the commissioner explained that the person who possessed the firearm admitted to it and was charged.

The six men were killed just two hours after the release from police custody.

According to police, officers responded to reports on gunshots on Jerome Avenue and Chesapeake Road and found six men with gunshot injuries — two on the outside of the silver Honda Inspire and four who were still sitting in the vehicle.

Each of the victims had multiple gunshot wounds.

Assistant Commissioner Solomon Cash said it is believed that four men, two of whom were armed with high-powered weapons and the other two with firearms, exited a white Kia Jeep and opened fire on the Honda.

Two of the victims have been identified as Delano Smith, 34, of Brown’s Alley, Kemp Road and Kendal Lord, 31, of White Addition.

A woman and a two-year-old girl, who were also shot in the incident, remain in critical condition in hospital.