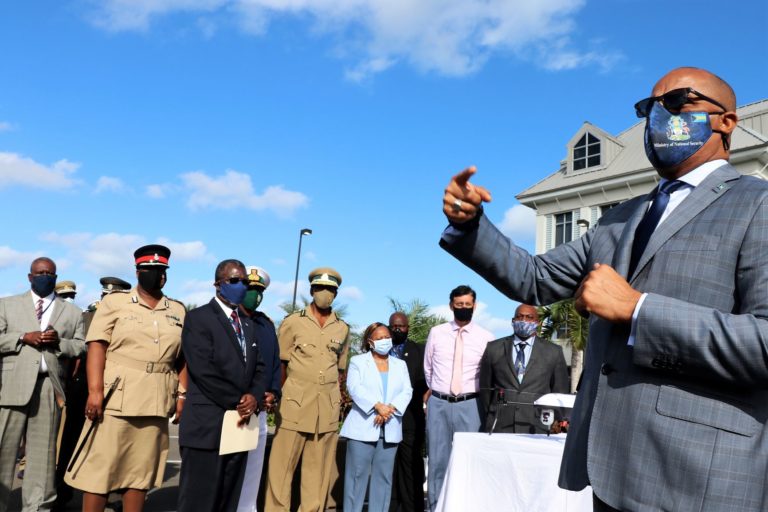 Minister of National Security Marvin Dames at the drone demonstration

NASSAU, BAHAMAS — During the introductory drone demonstration for the Bahamas National Unmanned Aerial Programme (BNUAP) yesterday, Minister of National Security Marvin Dames noted that these are only the first of the drones that will be used as part of national security initiatives being implemented to assist activities in all law-enforcement agencies under his ministry’s oversight.

“This is all a part of our government’s collective plan to integrate technology and to use that integrated technology to assist the personnel out there in the field,” Dames said during the informal event held at the Ministry of National Security’s head office on University Drive.

“These are not your Walmart drones,” he added, referring to suggestions made by social media commentators. “These are drones with tremendous capabilities, and we hope to integrate a lot our technology into these drones.”

According to the ministry, the combination of short-range and medium-range drones would serve to merge the four physical dimensions of sea, land, air and space. The information collected in real-time would aid in increased detection, tracking and apprehension capabilities, and the monitoring of individuals in custody for law enforcement agencies.

The event presented an opportunity for the head representatives of law enforcement agencies to speak briefly on the uses that will be made of the drone technology, with the completion of the order of the drones to be completed into the following year.

Dames gave the example of using the drones in association with the Shot Spotter Programme and crime fighting, and also pointed to the fact that training of Bahamian officers was an integral part of the drone programme.

“We are working on the establishment of an academy — a service academy, an academy of excellence — that we hope to provide training not only within The Bahamas, but throughout the region,” he said.

“There is a deliberate plan here, and we are committed to that plan; and with these drones and the training that our officers are receiving, this will put us at the forefront.

“We are on the cusp of some very pioneering work, and we are excited about it.”

The drones showcased at the demonstration included “The Nest”, “The Blimp”, “The Quadcopter” and “The Deep Trekker”.

According to the ministry, “The Nest” is an automated standalone Hexcopter system with a 55-minute endurance flying time. It will be linked with the police force’s Shot Spotter detection system, allowing for quicker response times by the police for criminal activity, accident investigation, crowd control and large public events monitoring.

“The Blimp” is a tethered drone that will be anchored 600 feet above the ground.  As its name suggests, it is shaped like a dirigible aircraft. It is 17-feet-long and has an eight-hour endurance flying time. The drone will be used by the Department of Corrections and at the detention center, manned by the Department of Immigration. It will allow for the daily monitoring of both facilities for persistent ground surveillance. The drone also has potential use for the monitoring of public events and the monitoring of inbound cruise ships bound to port facilities on New Providence and other ports of entry in the county.

“The Quadcopter” is a four-propeller versatile drone capable of vertical takeoff and landing. It has a 45-minute endurance flying time and, due to its size, it can be transported in law enforcement vehicles and deployed in less than five minutes.  It can also be launched from a police cruiser during criminal investigations or accident reconstruction, onboard RBDF ships for vessel-boarding search and seizure (VBSS) operations and for search and rescue (SARS) operations on land and sea.

“The Deep Trekker” is an underwater drone with an eight-hour endurance time.  It will be used as a remotely operated vehicle (ROV) to inspect all cruise and cargo ships for contraband when entering the port of Nassau and other entry points in the country. It will also be used to search for lost items at depths of up to 645 feet, and it will inspect underwater pillars or infrastructure not easily accessible by other means than from the sea.

The Ministry of National Security noted that all of the drones will be remote controlled using a ground station device.