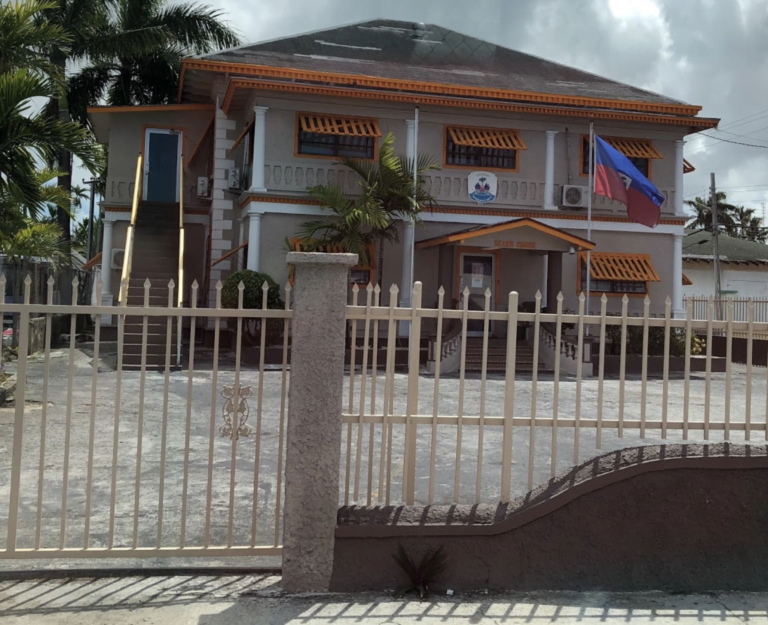 NASSAU, BAHAMAS — As a Haitian publication asserts that three diplomats at the Haitian embassy in Nassau were recalled in order to meet the demands of Bahamian authorities amid a Haitian commission of inquiry into concerns of corruption at its embassy, Minister of Foreign Affairs Darren Henfield yesterday refuted the assertion as patently false.

“I don’t know where they got it from.

“… They made a statement yesterday which inferred that The Bahamas government has some grouse with their staff and personnel here and that was the reason for their recall or it seemed to be leading that way, and I am not aware of it.”

An August 11, 2019, article in the Haitian publication ‘Haiti Libre’, said following allegations of bribery of diplomatic staff and employees at the Haitian Embassy in Nassau concerning arranged marriages between Haitian and Bahamians to obtain residence, a Haitian commission of inquiry visited The Bahamas last month and has “finished its mission”.

The publication is titled “Haiti – Flash: Myster around the investigation on corruption at the Embassy of Haiti in The Bahamas”,

The article continued: “According to a source at the Ministry of Foreign Affairs, the investigation, whose findings were not made public, would have revealed nothing irregular in the activities of diplomatic staff and employees or in the management of the embassy… however, since the end of the Haitian inquiry, staff movements suggest the opposite.

The article continues, “In addition, Consul Hernst Mesamours and the first secretary of the embassy, Blaise Claudy, were also recalled the same day in Port-au-Prince without anyone knowing why, nor whether they will be replaced.

“Finally, and still without explanation from the Haitian government, a generally well-informed source in foreign affairs suggests that all diplomatic staff will eventually be replaced in order to meet the demands of the authorities of The Bahamas, who no longer wish to collaborate with diplomats in office. Information that we were unable to confirm or deny. How to believe that nothing happened in The Bahamas? To be continued…”

Last week, Henfield told Eyewitness News Online that he expected Haitian Foreign Affairs Minister Bocchit Edmond to make a courtesy call of the Ministry of Foreign Affairs in The Bahamas.

He said would request that Edmond update the Bahamian public on the Haitian government’s investigation into corruption concerns at the Haitian embassy in Nassau.

Yesterday, Henfield said Edmond did not arrive in The Bahamas last week and he was unable to reach him Monday.

The minister said he planned to speak with Edmond today to discuss the matter.

Last month, Haiti’s Ministry of Foreign Affairs announced in a statement that the probe was set to begin and pointed to a news report of an investigation carried out by Bahamian law enforcement into corruption involving what it said were Haitian diplomats in New Providence.

The article the ministry referred to was printed on July 25.

The statement also noted that Haitian diplomats’ mandate is to portray a positive image of the country and act in a manner above reproach.

Five people accused of orchestrating a fraudulent marriage scheme in order for Haitian immigrants to gain Bahamian status were taken before the courts last month.

The accused denied the charges.

In its statement, Haiti’s Ministry of Foreign Affairs also advised that the Haitian officials would meet with Bahamian authorities and diplomatic staff, among others, to thoroughly investigate the matter.