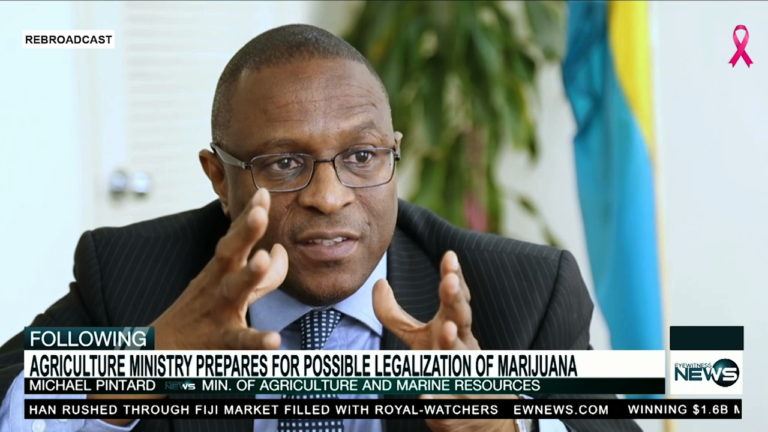 Minister of Agriculture and Marine Resources, Michael Pintard, said he has been in receipt of three proposals that promote the use of cannabis or hemp.

As government’s newly-appointed commission, headed by co-chairs Bishop Simeon Hall and Quinn McCartney prepare to conduct a public campaign on CARICOM’s recommendation to decriminalize marijuana for medicinal use,  Pintard said if successful these proposals will be given some consideration.

“We have no less than three serious proposals to use hemp for industrial purposes,” Pintard said.

“I have approached colleagues on the production of tiles using hemp and as you would be aware the region is ahead of us in this.”

Pintard said if and when a final conclusion is made on marijuana he has his ministry poised to offer technical support and advice.

“From an agricultural standpoint, we want to be ready and doing the research technically so that in the event that the law permits it we can advise persons in the commercial sector on the best practices to grow that crop or any other crop. When a final decision is made we are locked and loaded,” he explained.

While the Bahamas might be playing “catch up” to other countries in the region, Pintard said he views it as another agriculture product that holds huge potential.

“The decision must come from government, our first role is to understand the science and provide advice to farmers so that we can be ready,” he said.

He noted that if approved, one of the first things that farmers will be in need of is an island which he said The Bahamas has in abundance. Additionally, he said it will take a multi-ministerial approach to ensure that all protocols are followed if legalization is the route Bahamians want to pursue.

“All of the ingredients are there except the law. There is hardly any crop The Bahamas is unable to grow given its diversity.”