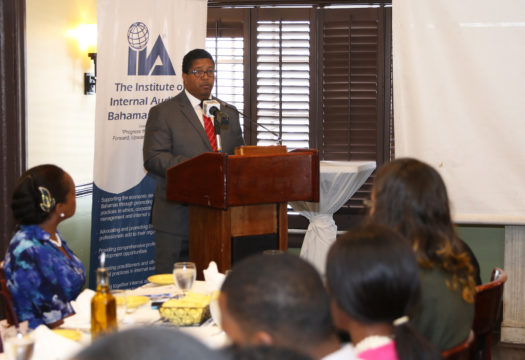 “Words like accountability and transparency must be more than just political buzz words. We must back that up,” said Deputy Prime Minister and Minister of Finance Peter Turnquest at Institute of Internal Auditors (IIA) Week-Bahamas Chapter luncheon held at Luciano’s of Chicago.

Turnquest revealed that the whole idea of internal auditing is so timely as the government tries to ensure transparency and accountability to reduce the instances of abuse and fraud in government spending. The government has stated that its aim is to improve processes and identify and ‘weed out’ bad practices and weaknesses in the overall system.

The minister shared exactly how cumbersome the Ministry of Finance is as it accounts for 61 per cent of the national budget, which translates to over $1,000,000,000.

To possibly enhance the government’s economic action plan, he suggested the help of the members of the IIA to review the Fiscal Responsibility Bill, 2018 in their free time and make recommendations.

According to Turnquest, it creates public access to more accurate information about the government’s fiscal performance in the endeavour to lower fiscal deficit, maintain a sustainable fiscal balance, lower debt to sustainable long-term levels and maintain current economic growth in line with growth in nominal GDP.

Knowledge of witness protection programs along with possible rewards for those auditors who report fraud elicited excitement amongst IIA members: Turnquest said, “Just being hypothetical: you bring me a $20,000,000 fraud, personally, I have no difficulty giving you one per cent – 10 per cent of that as an incentive.”

Transformation of the Ministry of Finance’s (value-added tax) VAT Audit Team also elicited excitement from IIA members who were informed by Turnquest that, “We are going to transfer those positions to Bahamians. Over the next few years, we will transition to a full team of Bahamian professionals thus creating new paths, and strengthening our local industry.”