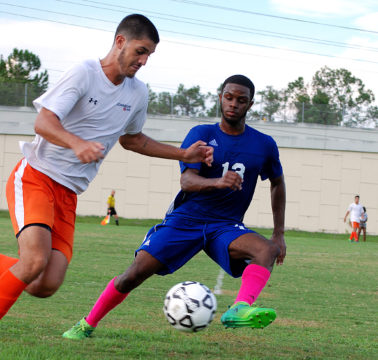 The UB Mingoes men’s soccer team scored a goal, created many opportunities along with some brilliant defensive plays during the weekend tour in Florida but still lost matches to Florida College and Johnson University.

Head Coach Dion Godet says he felt the team had some great moments of soccer during the tour but because both teams had an almost endless supply of substitutions it was difficult for UB to match the intensity.

“Our squad demonstrated a competitive spirit and produced opportunities during the matches,” he said.

“However a lack of manpower eventually gave way to strategic use of 30-man plus bench and key substituting in the latter part of the match,” he said.

Tristin Arnold scored the lone goal for the side.  He scored off a corner from Elcott Johnson in the 7th minute against Johnson University.

“Elcott just gave me a certain look and I was one of the taller guys in the box and when I ran inside I just saw a chance because the ball came right at me and I knew I had to head it to the far post,” he said.

The side now gets ready for competition in the local Bahamas Football Association league next month.  The Mingoes are the defending BFA champions from the 2017/2018 season.