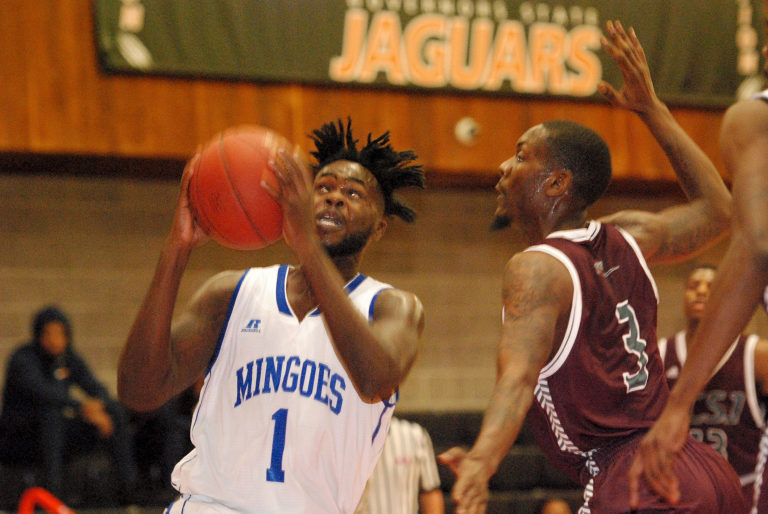 UNIVERSITY PARK, Illinois – The University of The Bahamas Mingoes men’s basketball team lost both games at the Governors State University Jaguars Tip Off Classic over the weekend.

Head Coach Bacchus Rolle said he that despite the two loses the team still comes a winner as there are core qualities that the team developed over the weekend tour.

“We learn from this week that we have to trust the system even though we’re down,” Rolle said.

He added that the team also learned to trust their training.

“We have to learn to trust the process and know that our system works because we’ve seen the success with it,” he said. “We should be able to turn this into wins down the stretch.”

Coach Rolle said the team also gained a bit of cohesion on the trip because of the bonding time the team had during the trip.

“As we leave Chicago to play in our homecoming games and the NPBA season the team has built that bond and togetherness that will pay off down the road. We’ve seen some spots on the floor where we are totally cohesive unit and we’ve seen some time where we are just playing hero ball and we’ve cooled that down because we’ve come together so great as a unit.”

Governors State University is located in University Park is a village just south of Chicago.

The Mingoes lead by as much as six points at one point in the game but lost focus in the last two minute of the game.

An exchange of free throws and a jumper with about 1:40 to go tied the game at 75—the fourth tie of the game that also saw eight lead changes.

“We strayed away from what we tried to do with the team concept and fell back on to a lot of individual play,” Head Coach Bacchus Rolle said.  “We had some miscues and it just slipped away there at the end and it was a game we could have easily have won.”

Ramon Dames and Romero Cornish put up 14 points to go along with 8 assists from Dames. Antwan Bevans and Kemsy Sylvestre each had 10 boards as well.

University of The Bahamas 80: Governors State 98

The Mingoes lead the host team Governors State Jaguars at the half 42-41 but it seems the home team was determined to not lose their own tournament.

Out of the first half, The Jaguars started raining threes on the Mingoes to go along with a 7-0 with about 12 minutes to go in the go up 10 on UB.  Governors State never let go of the pressure after that and went on to win 98-80

Coach Rolle said it best: “The second half killed us.”

“We went into the second half up and we knew those guys were not going to roll over and play dead and they came out with a lot of intensity especially on the defense. That intensity forced a lot of turnovers and unfortunately, we made a lot of miscues and some really bad decisions with regards to passing that turned the ball that lead to easy baskets and we lost focus on a few of their key players.  They hit a lot of threes down the stretch that blew the game wide open.”

In the loss, Justin Smith led the team with 25 points (6 three-pointers). Kemsy Sylvestre added 24 points and 8 boards. Antwan Bevans also with a strong showing with 13 points.

Coach Rolle said the team has to stay in the game especially when they start to go down.

The Mingoes next play the homecoming doubleheader against The University of The Virgin Islands November 9-10 at the Kendal Isaacs Gymnasium.