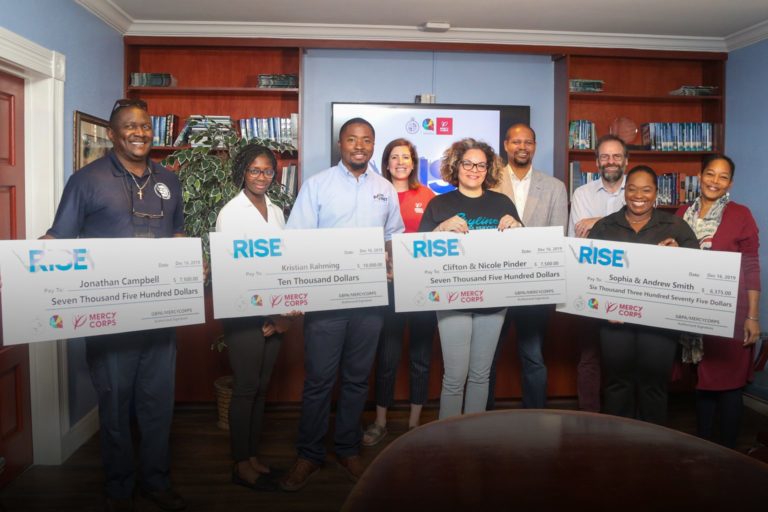 GRAND BAHAMA, BAHAMAS — It has been 18 months since the passage of Hurricane Dorian and 15 months since the Restoring Industries, Sustaining Employment (RISE) initiative journey began. While evidence of the catastrophic Category 5 storm is still very much apparent, so too is the reemergence of more resilient pockets of economic activity throughout the length and breadth of Grand Bahama — a reemergence hundreds of business owners believe would have been considerably more challenging without the RISE program’s support.

The RISE initiative is a collaboration between implementing partners Mercy Corps, a global humanitarian organization, and the Grand Bahama Port Authority, Limited (GBPA), with the generous financial support of the American Red Cross and Bacardi Limited. As the initiative officially comes to a close, its impact can be seen and felt in the day-to-day operations of the businesses it has empowered and helped.

Mercy Corps Bahamas Country Director Paula Miller attributes the accomplishments of RISE to the generous financial support of its donors, GBPA as the implementing partner, and the adaptability and incredible resourcefulness of business owners.

“This initiative would not have been possible for any single agency to do alone,” said Miller. “We have really enjoyed working together with GBPA, and it is inspiring to see Grand Bahama businesses reopening despite a pandemic on top of a natural disaster. While this particular initiative is closing, we stand ready to support Grand Bahama in future initiatives if needed.”

The RISE pilot launched in December 2019, supporting local merchants in the run-up to the business year’s most profitable shopping season. The program’s initial goal was to assist 100 local businesses that were impacted by Dorian with grants of up to $10,000 to support their recovery efforts. As the pilot program was monitored and its impact and success measured, the RISE team reevaluated its goals and revised its targets upward, aiming to provide $2.5 million in funding to nearly 300 micro and small businesses across Grand Bahama.

Derek Newbold, senior manager of business development for GBPA and Invest Grand Bahama, expressed: “Business owners across the island continue to manifest the tangible and meaningful impact of the RISE initiative. For many, it helped them defy the odds of a post-Dorian recovery, while creating a bolstering effect to help soften the impact of the COVID-19 global pandemic.”

Allison Dworschak, program quality and partnerships lead for Mercy Corps, said: “A lot of work went into measuring the impact of RISE. The data we gathered during the program tells us a lot about the strength and resilience of the small business community in Grand Bahama. For example, 87 percent of participants reopened and were regularly transacting after they received the funding and training. More than a quarter said that, without RISE, they wouldn’t have reopened at all. Another 12 percent said they likely would have reopened eventually, but wouldn’t have retained staff.

“The RISE program did a lot of good, but we are especially excited to have saved at least 300 local jobs. And looking at how the $2.5 million in grant funds were spent, we know the majority — 75 percent — was reinvested locally into reconstruction, large equipment repairs and other local purchases.”

GBPA and Mercy Corps are considering future ways to collaborate in the event of a new crisis.

GBPA Executive Director Henry St George commented: “When a restaurant that had been damaged by Hurricane Dorian was able to reopen having received a RISE grant, and then partnered with another recipient who was able to provide delivery services, and together they collaborated to distribute meals to the aged and vulnerable during the summer lockdown last year, then the impact of the program and the significance of the small business community was really visible.

“We are highly aware of the work still to be done in rebuilding our small business economy, but we are extremely proud of the RISE program and even more so of the men and women who participated in it. Our partnership with NGO Mercy Corps has been a crucial pillar of our response to Dorian, and we are grateful to them and to both the American Red Cross and Bacardi.”