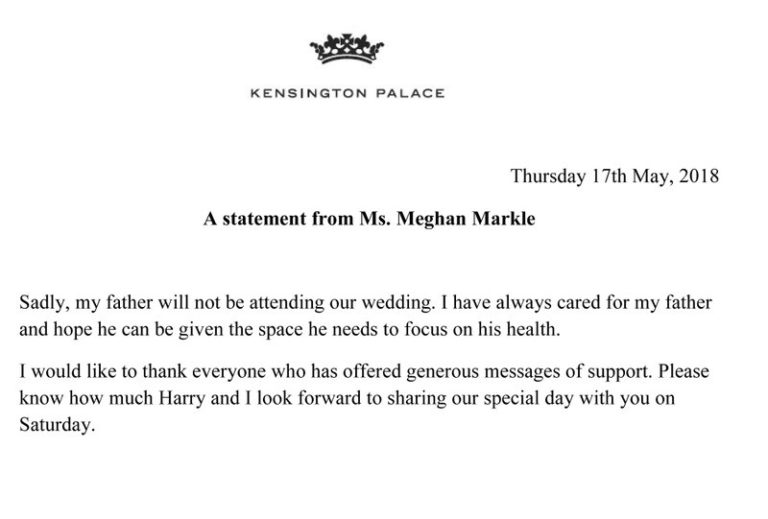 WINDSOR, England (AP) — Meghan Markle announced Thursday her father will not be at her marriage to Prince Harry due to health problems.

“Sadly, my father will not be attending our wedding,” she said in a statement released by Kensington Palace. “I have always cared for my father and hope he can be given the space he needs to focus on his health.”

The palace has not revealed details about 73-year-old Thomas Markle’s health issues, but the celebrity website TMZ says he is hospitalized in California after undergoing a procedure to clear blocked coronary arteries.

He reportedly told the website he was ok but needed to rest. Thomas Markle had been scheduled to walk his daughter down the aisle when she weds her prince Saturday at St. George’s Chapel at Windsor Castle.

It is possible Doria Ragland, Meghan Markle’s mother, will fill that role instead. No replacement has been officially named.

Meghan Markle’s statement came as military personnel rehearsed a procession on the streets of Windsor.

Planners used Thursday’s practice session to finalize some of the details of Saturday’s gala.

The wedding day festivities will include a 25-minute carriage ride outside the castle grounds by the newlyweds after the ceremony is concluded. More than 2,600 members of the public have been invited onto the castle grounds to watch the procession.

Markle’s mother has arrived in England and is expected to meet Queen Elizabeth II — Harry’s grandmother — and other senior royals in the two days left before the wedding.

Ragland — who arrived carrying a Burberry suit bag, a possible clue to her wedding outfit — will visit with Prince Charles and his wife Camilla, Prince William and his wife Kate, and other members of the family her daughter will officially join Saturday.

The drama surrounding Mr. Markle, and harsh comments about Meghan Markle made by estranged members of her extended family who were not invited to the wedding, have increasingly dominated tabloid coverage of the royal wedding in recent days.

Daily Mail columnist Sarah Vine on Thursday castigated Harry’s Kensington Palace press operation for not doing more to prevent Markle’s relatives from sniping at her during the run-up to the big event.

“Even the most cursory internet search would have thrown up a few red flags,” she said. “Could they not have taken at least a few steps to get them on-side?”