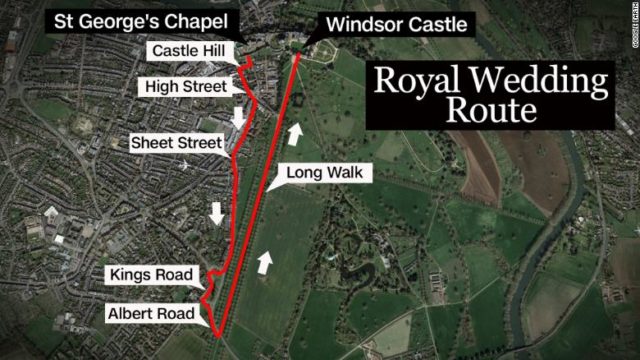 London (CNN): Prince Harry and Meghan Markle will invite more than 2,600 members of the public into the grounds of Windsor Castle to share their wedding day, Kensington Palace said Friday.

The invitees will be able to watch the arrivals of the bride and groom and their guests at St. George’s Chapel, where the ceremony takes place on May 19, and to watch the newlyweds depart the castle on a carriage procession through the town of Windsor.

“Prince Harry and Ms. Meghan Markle have said they want their wedding day to be shaped so as to allow members of the public to feel part of the celebrations too,” a palace press release said.

“This wedding, like all weddings, will be a moment of fun and joy that will reflect the characters and values of the bride and groom.”

Members of the public from across the United Kingdom will make up 1,200 of those invited, the palace said. “The couple has asked that the people chosen are from a broad range of backgrounds and ages, including young people who have shown strong leadership, and those who have served their communities,” it said.

Another 100 of those invited into the grounds will be pupils from two local schools. Two hundred will be from a range of charities and organizations with which Harry and Meghan have a close connection.

Thousands of people without specific invitations are expected to line the procession route through the town of Windsor, which is about 40 km (25 miles) west of central London.

For his wedding to Kate Middleton in 2011, Prince William did not issue any specific invitations to members of the public, beyond those invited to the ceremony itself and following reception. The 1,900 guests at Westminster Abbey included around 1,000 friends and family members along with foreign diplomats and leaders, religious leaders and 80 people who worked for charities supported by the Prince.

At around 800, the capacity at St George’s Chapel is much smaller. Prince Harry and Markle have yet to reveal the guest list for the ceremony.

The wedding will take place at 12 p.m. GMT (7 a.m. ET) on May 19 and will be officiated by the Dean of Windsor, the Right Reverend David Conner and the Archbishop of Canterbury Justin Welby, Kensington Palace revealed last month.

Following the carriage procession through Windsor after the ceremony, the newlyweds and guests will attend a reception at St. George’s Hall in Windsor Castle prior to a private evening reception for friends and family hosted by Prince Charles, Harry’s father.

St. George’s Chapel has been the site of many royal weddings, although other members of Prince Harry’s immediate family were wed in London. His father and mother, Prince Charles and Princess Diana, were married in 1981 at St. Paul’s Cathedral, while his older brother, Prince William, wed Kate Middleton in 2011 at Westminster Abbey.

Since the couple revealed their engagement in November, they have made several public appearances, taking trips to Cardiff, Edinburgh, Nottingham and south London and spending a traditional Christmas with other members of the royal family including Queen Elizabeth and Prince Philip.

Earlier this week, Harry and his bride-to-be appeared alongside the Duke and Duchess of Cambridge — dubbed the “Fab Four” by the British press — to speak about the future of the young royals’ charity, the Royal Foundation.

Markle admitted the next few months would be busy with wedding plans, but said she plans to “hit the ground running” in her work to empower girls and women in the UK after the big day.

This article was written by Laura Smith-Spark and Judith Vonberg, CNN. CNN’s Max Foster contributed to this story.