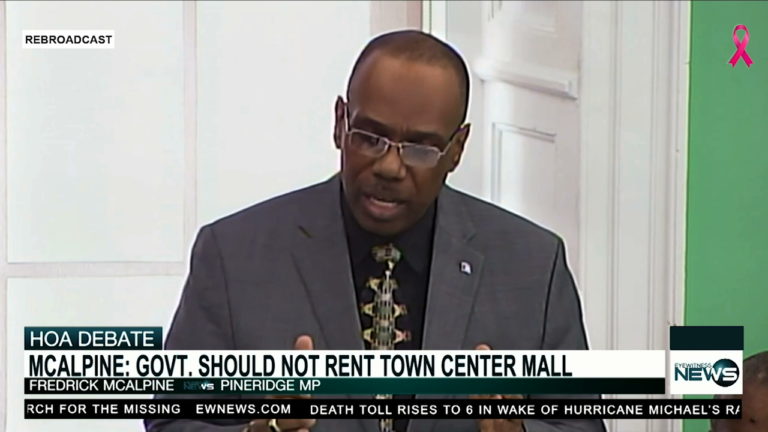 Even if the Town Centre Mall was being offered for free, outspoken Pineridge Member of Parliament (MP) Frederick McAlpine charged that the government should not enter into an agreement to lease the building as a sitting Cabinet Minister has shares in the facility.

His comments came yesterday during his contribution to the debate on a Resolution for government to lease the Town Centre Mall, which is partially owned by Trade, Financial Services and Immigration Minister Brent Symonette.

McAlpine suggested that the mere thought of a conflict of interest will bring irrefutable damage to the Minnis administration’s image.

“Even if the government articulates that there isn’t a conflict, the very perception is seen by most in view of ownership or large shares by a cabinet minister as a conflict,” McAlpine said.

“The optics on this resolution doesn’t look good,” he said.

“The appearance of conflict is what we as a government should be circumventing at this time, despite the generosity or concessionary rate that is being offered. The reality is if it was being given to us for free, the government should refuse because of the cabinet position that he or she may hold.”

During yesterday’s debate, McAlpine also questioned why the government abandoned its decision to relocate the general post office to the Independence Shopping Center.

Under the Christie-led Progressive Liberal Party (PLP)  government, work was halted on the project after residents spoke out against the decision, claiming that it would affect their way of life in the Garden Hills community.

McAlpine said the Town Center Mall is only several feet away in the same general area, and he questioned what difference it would make. He noted that some $3 million of taxpayer funds was already pumped into the facility and the government would end up dishing out even more to lease the Town Centre Mall.

“If someone has a strong arm they can throw a rock at the Independence Shopping Centre from the Town Centre Mall, so I do not understand their reasoning for this decision,” McAlpine said.

Mcalpine and four other FNM MPs including Centreville MP Reece Chipman, Bain and Grants Town MP Travis Robinson and Golden Isles MP Vaughn Miller voted against the relocation of the post office to the Town Centre Mall while 22 FNM MPs voted for the relocation. All opposition members voted no.