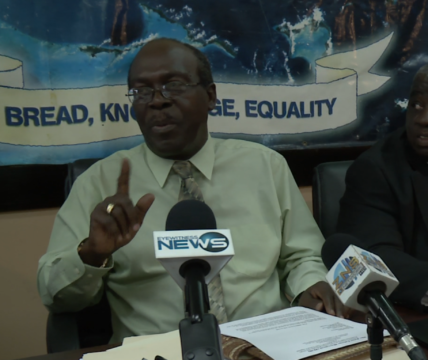 Unions across the country are planning to withdraw their labour this coming Tuesday, April 10, following a recent ruling by the Court of Appeal (COA) that dismissed the Bahamas Industrial Manufacturers and Allied Workers Union’s (BIMAWU) case against Morton Salt in Inagua.

The appellate court also deemed that the industrial agreement, which governs workers, was simply an employment contract.

Union leaders met at the House of Labour on Wulff Road Thursday, to strategize what they said, was the way forward following the installation of a new executive board for the Trade Union Congress (TUC).

TUC President Obie Ferguson said, despite repeated calls for government’s intervention on that ruling, they have not been able to meet with the minister of labour or any other government official to try resolve the issue.

Ferguson said that the ruling could have “catastrophic” implications for labor in the country.

“The ruling has deemed that all of the agreements that we have signed are null and avoid,” Ferguson explained.

“The government should make this priority and to date, they have not even asked to meet. The ruling dated February 28, 2018 by Acting Appeal Justice Sir Michael Barnett said, the union attempted to rely on the industrial agreement, which called for ‘day and shift workers’ to be paid ‘double time’ for working on Sunday.

“This meant, according to the ruling, that employees were not entitled to compensation for Saturday. As for the ‘unilateral’ schedule change, Sir Michael said, this was provided for in the industrial agreement.  He determined that the union’s argument was not ‘tenable’.”

The matter is now in the hands of the International Labor Organization (ILO) and, according to National Trade Union Congress (NTCU) President Bernard Evans, the union also plans to take the matter to the Privy Council.

“The government can enact legislation right now to do away with that loop hole that allowed the judicial system to render such a ruling,” Evans said.

“We believe that by taking action next week, we can cause that to happen.”

Other union leaders, including President of Bahamas Hotel Maintenance and Allied Workers Union (BHMAWU) Darnell Ferguson said, successive governments have talked long enough and refused to do what is in the best interest of workers

“Things are about to get messy,” she said, stating that “Bahamians have been thrown under the bus for too long and the talking is over.”

Ferguson also acknowledged a lack of support from the union’s membership in recent years, when a call to action by union leaders was made. He said however, that this time, the response will be different.

“Once everyone meets with their membership and explain what this ruling implies for them… you will see the numbers,” he said.

“The government has left us with no other choice.”

In response to the ruling, Labour Minister Dion Foulkes said, it has been turned over to the Attorney General’s (AG) office for review.