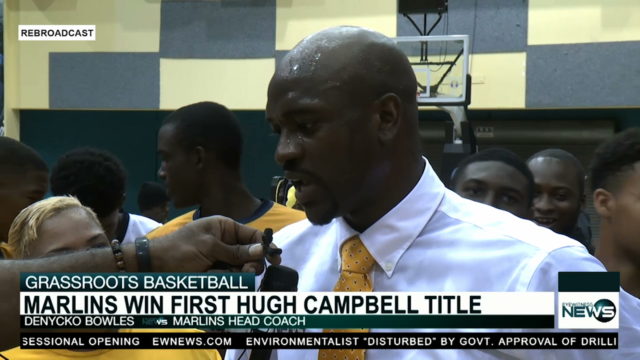 NASSAU, BAHAMAS – The Doris Johnson Mystic Marlins captured the first Hugh Campbell Basketball title in the school’s history on Monday night, defeating the No.1 ranked team out of Freeport, the St. George’s Jaguars.

Behind 19 points from Janus Sheperd and a 16-point and 16-rebound performance from team captain Malachi McCoy, the Marlins pulled off an 84-75 double overtime victory.

Despite the accomplishment, head coach Denycko Bowles said the team will only celebrate the victory for a short time, seeing that the 2019 National High School Basketball Championships are just around the corner.

This year’s event is set for March 27- April 1 in Grand Bahama.

“We have to continue to put in the work,” he said. “Our victory against the Jaguars wasn’t flawless by any means, which shows that there are some things that we still can improve on. We are going to take a few days to celebrate this, but then it’s back to the drawing board once again.

“At the beginning of the year, my guys told me that they wanted to win it all this year. We started our season in Orlando with a win and they believed in themselves every step of the way so far. It’s our first title and our second time here, and I’m just extremely thankful to be in this position.”

So far this season, the Marlins have also won the C.I. Gibson Holiday Invitational and the Government Secondary Schools Sports Association (GSSSA) titles.