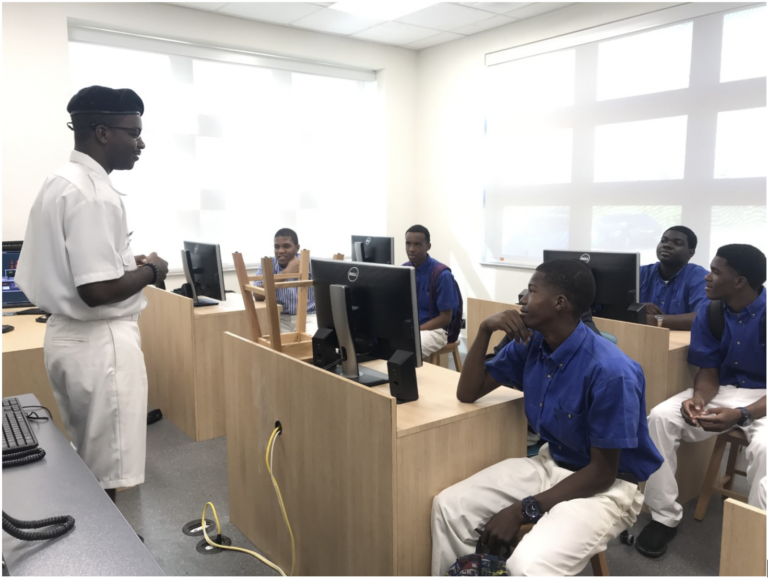 LJM Maritime Academy (LJMMA) made a big impression on students from schools across New Providence during its campus tour Friday, January 11. Students from Government High School, pictured here, learn more about the formal professional level training programmes the school has to offer. (Photo by Precision Media)

NASSAU, BAHAMAS – In its first open house for the year, the LJM Maritime Academy (LJMMA) rolled out the red carpet to 150 prospective students interested in pursuing a career in maritime.

The 40-minute campus tour which included opportunities to hear from lecturers and current student excited 22-year-old Tristan Lightbourne and his mom, Tiffany Garvey – the latter, flew in from Grand Bahama to tour the facility for the first time along with her son.

“Although this is my first visit to the Academy, I’ve been keeping tabs on the school for some time,” said Lightbourne, an avid mariner who holds a Class B Master Licence and is pursuing a Class A Captain (Advanced Navigation) Licence at another institution.

Lightbourne, who envisions himself one day working as an officer on a ship, was impressed by the state-of-the-art technology offered at the training facility located on Maritime Cay, formerly Crystal Cay – the tiny islet which connects to the back of Arawak Cay by the bridge.

“I think this has the formal structure, the discipline and the opportunities to go to sea, that I’ve been looking for,” he said.

His mom agreed. “This school made an awesome first impression. I am very impressed with this facility. Tristan has done short courses. He wants more time at sea and more practical experience. I believe this is the programme he needs to be in.”

The Academy is named in honour of the president of The Campbell Group of Companies, His Excellency Lowell J. Mortimer, OBE, The Bahamas non-resident ambassador to India.

The Academy, headed by President, Dr Brendamae Cleare provides two, three-year programmes in nautical science with an option in either navigation or engineering. It also encompasses a sea experience which is 12 months at sea. At the end of successful completion of the diploma studies, cadets will sit examinations through the Bahamas Maritime Authority (BMA) for certification as officers.

Other academic offerings include two four-month certificate programmes for Ratings, to become part of either a navigational or engineering watch in supporting capacities. At the end of these programmes, before licensure could be obtained, students must have two months internship at sea.

Hugh Sands, senior master at Doris Johnson Senior High School, felt it only fitting to bring a group of 28 tenth graders to the campus as some students had expressed an interest in engineering.

“These tenth graders are in the top stream at our school with a 3.0 or above GPA. Depending on what they see here today, some might decide this is the school for them,” he said. “It was important for us to have them see the range of careers out there, particularly as some have indicated engineering as a career option.”

“It is vital to expose students to different careers,” said Dellareese Bethel, a guidance counsellor at Government High School chaperoning 39 eleventh and twelfth graders participating in the tour.

“We tell students to look at what’s lacking, so we won’t have to bring in persons from abroad to come and fill those positions. We can have Bahamians fill those posts.”

When it comes to career choices, Captain Arun Bhatnagar, head of Nautical Studies at the maritime academy, believes the earlier the better for students when it comes to exposing them to careers outside the mainstream.

“It makes sense to introduce the programme to tenth, eleventh and twelfth graders because that’s when they are firming up their minds about career choices, but even younger students – middle students in fifth through seventh grades – should be introduced to career opportunities other than the traditional form of professions and careers most people follow,” he said.

There are many factors which make the maritime Academy the perfect match for Bahamian students, according to lecturer and school guidance counsellor, Dr Alvin Hepburn.

“Students get the best of both worlds,” he said. “You’re close to home, attending a top-notch institution on the same playing field as other similar institutions around the world, with competitive tuition,” he said.

Before the tour wrapped up, Travon Seymor, a twelfth grader at Government High School was sold.

“I think I’m a good fit for this institution,” said the Government High School twelfth grader. “I was just amazed by it.”