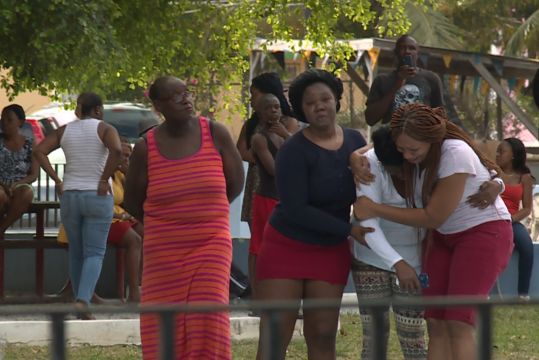 NASSAU, BAHAMAS – A man was shot and killed and another injured as a result of a drive-by shooting in Fox Hill, Chief Superintendent Solomon Cash said yesterday.

Speaking to reporters at the scene, Cash said another man was shot in the leg during the incident and transported to hospital.

Around 3:30 p.m., two men on a red moped drove alongside the victims and opened fire.

According to Cash, police were patrolling the area at the time of the shooting and witnessed the incident “right before their eyes”.

“So, what they did is pursue the moped which was leaving the scene at the time,” he said.

“They pursued that moped through several corners here in the Fox Hill district.

“Those persons were able to elude the officers in the Blueberry Hill area, near a church.”

Both suspects abandoned the moped near Bahamas Harvest Church and ran into nearby bushes.

One of the men dropped a weapon as he fled, according to authorities.

The motive for the killing remains unclear.

Cash appealed for anyone with information to come forward.

As officers canvassed the scene, the victim’s body, which was covered by a tarp, was lying in the street alongside the pavement on the perimeter of the Fox Hill Park.

Dozens of onlookers gathered, with some sitting on the walls of nearby buildings.

Screams pierced the air as the victim’s body was lifted and carried away.

At the suggestion that police presence in the area was not sufficient to deter the shooting, Cash said, “Our officers are committed to securing the citizens of The Bahamas.

“You will find from time to time you have isolated incidents.

“But, what I want members of the public to understand is that some perpetrators or suspects are relentless in carrying out acts of criminality.

“It is difficult when their minds are made up to carry out these acts to prevent them, but we will remain focused with our strategies to remain in these communities where we would want to prevent or minimize these types of events from happening.”

In an interview with Eyewitness News Online, Fox Hill MP Shonel Ferguson said the shooting was “sad and unfortunate”.

She offered condolences to the family of the victim and said the shooting is a somber reminder of the need for the community to remain vigilant.

“We have to continue working at in terms of having our young people [get] to the point where they can deal with difference; deal with things in another way,” Ferguson said.

“It is a tragic toll on the young men of our country.”

The weekend incidents pushed the murder count for the year to 16.

This represents a 24 decrease in murders.

Up to this point last year, there were 21 murders in the country.

The Minnis administration has pledged to address crime systematically, and at its root causes.

In January, Police Commissioner Anthony Ferguson advised he was finalizing his policing place for 2019, but said it will remain relatively unchanged as the previous plan “is still relevant, it works, and it is yielding desired result and more”.

He said once completed, the plan will be submitted to Minister of National Security Marvin Dames, who is expected to table it in Parliament.

He did not commit to a timeframe, however.

That plan has yet to be tabled in Parliament.