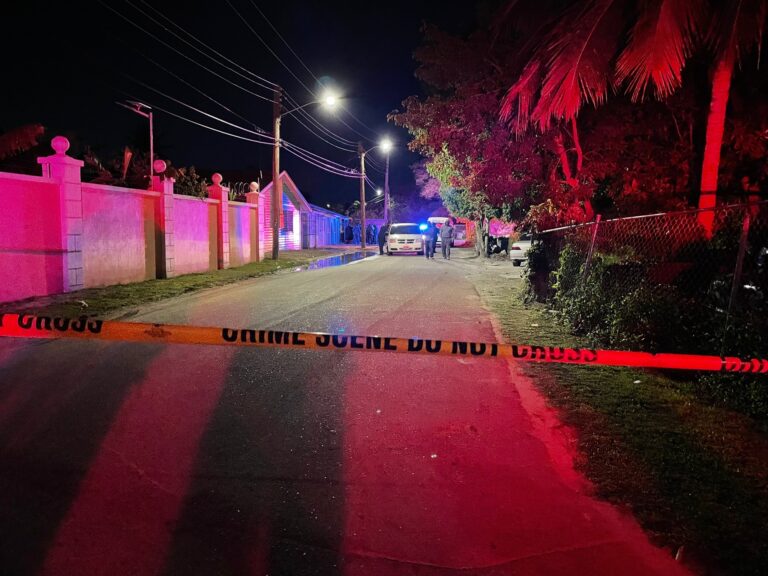 The scene of a homicide at Sumner Street off Soldier Road.

NASSAU, BAHAMAS — Police recorded two more killings on the streets of New Providence when a 32-year-old man was gunned down as he visited relatives yesterday, and another man was found with gunshot injuries in his car.

The 30-year-old man was found in his burgundy Nissan Cube by neighbors who heard gunshots shortly before 2am in the area of Armbrister Street, Fox Hill this morning.

The man was taken to the hospital by a private vehicle but later died shortly before 4am, according to police.

In the next incident, the victim was reportedly visiting family members at a residence on Shahs Street off Sumner Street in Red Land Acres sometime around 9.30pm yesterday.

Police said when the man stepped outside, he was approached by a black Suzuki Swift and its occupants opened fire on him.

The man ran from the area down the hill and collapsed in front of another residence. Police said the gunmen exited the vehicle and continued to shoot the man about his body.

The suspects escaped and abandoned the vehicle, which was found in the area of Kennedy subdivision.

Last night, police said one of the suspects is in custody assisting police with their investigation.

Police said it was too early in the investigation to confirm whether the killing was linked to the latest string of homicides.

Another man was killed in the area of Gibbs Lane off Infant View Road in a separate incident yesterday.

Chief Superintendent Chrislyn Skippings said the victim was traveling west along Infant View Road when he was cut off by another vehicle. The occupants of the vehicle fired at the victim in his car, and he succumbed to those injuries.

Skippings said the victim is in his mid-30s and was known to police; however, she added that police had not had any interactions with him “for a relatively long period of time”.

“He was actually working, doing extremely well in the past few years,” she added.

On Monday, police on the island of Abaco reported a man was killed in a shooting incident around 6.45 pm in the Bahama Coral Subdivision.

The country has recorded nine homicides for the year.