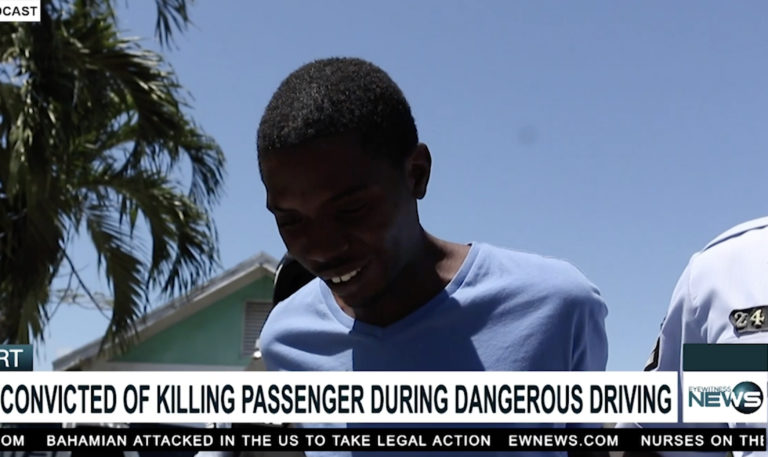 NASSAU, BAHAMAS – Twenty five-year-old Hartman Rolle Jr. of St. Alban’s Drive appeared before Magistrate Kara Deveaux-Turnquest on Tuesday, charged with killing in the course of dangerous driving, driving while not covered by third party insurance, and driving without a valid driver’s license.

As a power outage impacted court proceedings on Tuesday and the standby generator failed to kick in, those sitting in the courtroom provided light from their cellphones while the charges were read to Rolle Jr in the dark.

According to police reports, it was around 1:30 a.m. on February 2nd, 2019, when four occupants of a grey Nissan Primera were traveling south on Soldier Road near Spencer Court. The driver lost control of the vehicle and collided with a utility pole. All four passengers were extracted by the jaws of life and were seriously injured. They were then transported to the Princess Margaret Hospital for medical care.

Avery Francis and Dereck Taylor remained severely injured while 19-year-old Lathura Penn, who was in the front seat, succumbed to her injuries the following day due to blunt force trauma to the neck and chest.

According to court documents, the vehicle was registered to Rolle’s father. The defendant was also not named on the vehicle’s registration or insurance.

Rolle pleaded guilty to all three of the charges levied against him.

He was ordered to pay a sum of $10,500 in fines or spend one year and four months in prison. The defendant has been remanded to the Bahamas Department of Corrections (BDOC) until at least half of the fees are paid. He is expected to return to court on June 21st.