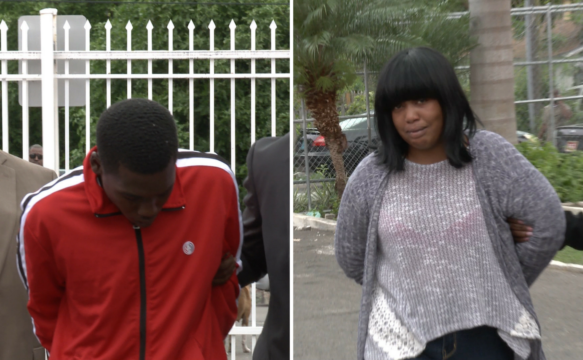 From left: Charlton Pierre, 20 and Angelica Roop, 23 as they were hauled to court Monday.

Charlton Pierre, 20, who was charged and remanded to the Bahamas Department of Corrections (BDOC) on Monday for the murder of 16-year-old Stephano Newbold, told the court yesterday that “there is a contract out for my life”.

It is alleged that Newbold and Pierre were in an altercation on last Friday, when the teen was stabbed. Police said that emergency medical personnel were called to the scene, however. Newbold was pronounced dead a short time later.

Pierre who appeared remorseful, was not represented by an attorney when he appeared before Magistrate Joyann Ferguson-Pratt. He told the court that he learned from a friend who dropped clothes to him while in custody, that if he went to prison, his life would be in danger.

Ferguson Pratt made note of the concern and informed the accused that the Commissioner of Prisons will be notified.

Pierre also told the court that last Friday was the first time he had met the deceased and that he was allegedly provoked. He was however, cautioned by the magistrate, that he was not on trial.

The accused was charged along with Angelica Roop, 23, who was charged with accessory after the crime. Roop was also not represented by an attorney and told the magistrate that she did not know what she was getting herself into.

The pair was not required to enter a plea and bail was denied. Both are expected to return to court on July 26 to face a voluntary bill of indictment.