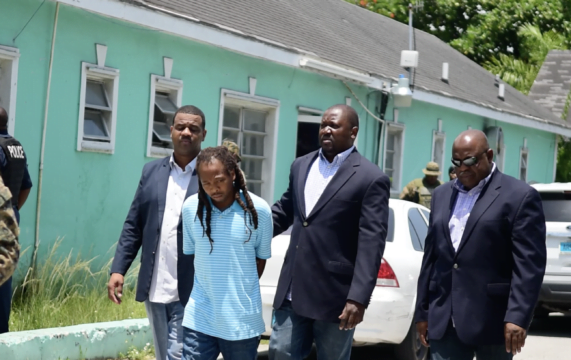 NASSAU, BAHAMAS – A 32-year-old man was hauled before the courts on Wednesday, charged with the stabbing death of popular Bahamian-Jamaican musician, Davon Knight, also known as Mdeez.

Shamano Cooper in the blue and white striped shirt, appeared before chief magistrate Subusola Swain, charged with one count of murder.

On the day in question, police said Knight and Cooper got into an altercation, which resulted in Cooper stabbing Knight . Knight attempted to drive himself to the hospital but crashed at the junction of Prince Charles Drive and Fox Hill Road.

He died on the scene.

Johnson, in the blue sweater and pink shirt, was charged with the stabbing death of Jareth Cartwright.

Police said Cartwright was walking on Rosewood  Street in Pinewood Gardens when he was approached by a man who stabbed him before fleeing the scene.

Both men were  not required  to enter a plea to the charges and were remanded to the Bahamas Department of Correctional Services until August  15, 2019 when they will return to the Supreme Court for the service of a voluntary bill of indictment.