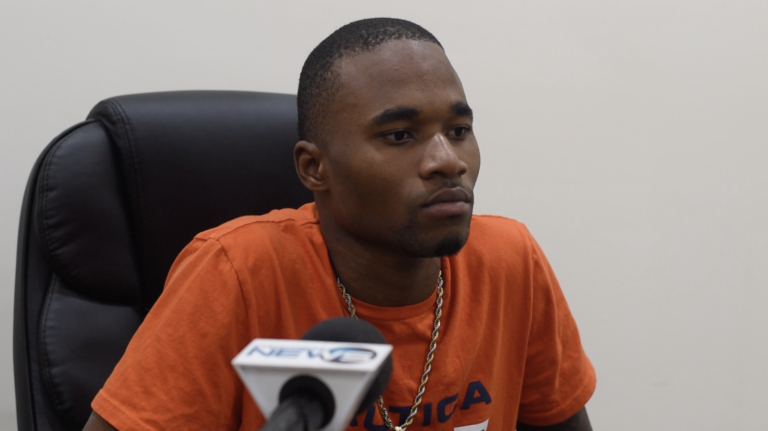 Says he only wants name cleared

The teen housekeeper at a local resort was not charged with a criminal offense, but his photo was posted on a social media news website attached to an article, which alleged that he was arrested by police for a handgun involved in a recent murder.

Now, having been released from police custody on Monday following his arrest over the weekend, Moxey said that he is in fear of his life.

He said he wants all accusations levied against him on social media to be removed.

Recalling the series of events that transpired last weekend, Moxey told Eyewitness News Online that he and three of his friends were heading home around 1:00 a.m. on Saturday, December 15, when they were allegedly pulled over in their vehicle by officers of the Central Detective Unit (CDU).

Moxey said there was no illegal contraband or weapon found in their possession or in the vehicle, and the driver was not found to be breaking any traffic laws.

“They were pointing [guns] at the car and telling us to get out of the car.

“When we came out of the car they were kicking us and throwing us on the ground.

“They dragged us and threw us in the back of their white jeep,” Moxey alleged.

Moxey further claimed that they were taken to CDU for questioning in relation to a murder of a security officer that occurred the previous day (Friday, Dec. 14) on First Street, the Grove.

“I told the officers that I had moved out of the Grove for almost a year now, and because I have a 9 to 5 [job] I did not know what was going on,” Moxey recalled.

“When they took us to CDU they said that we would be charged with a murder and an armed robbery.”

Moxey further alleged that while in custody, photos were allegedly taken of him and his friends by a police officer as they wanted to find out if they had been accused of any previous crimes.

He also claimed that his friends were allegedly beaten by officers while detained.

But despite what transpired at CDU on the night of their arrest, Moxey said to he and his family’s amazement, his photo and the photo of his friends later appeared on the ‘Bahamas News Ma Bey’ website, along with a brief article, which outlined that they had been arrested by police for a handgun connected to a murder case.

Moxey is not only irate that his photo, which was allegedly taken while in custody has been posted on a social media news site, but he pointed out that he was never charged with any criminal offense.

The teen is now fearful of losing his life and his job.

“The family members of the [murder] victim was up in arms about it [after seeing the post on social media]. Our face has been placed out there that we did these things, but we did not do it,” Moxey said.

“They [police] found the right people who committed the murder but they still put us out there with no retraction.”

According to Moxey, while detained last weekend, he was not allowed any visitors, nor was he allowed to place any phone calls.

“They had us to CDU and moved us from CDU. They had us back and forth [from station to station] and they tried to give me an extension for nothing. When they found the killers they still [did not immediately] release us,” Moxey claimed.

Moxey said the ordeal has also damaged his personal and professional reputation.

“This is ruining my reputation and people are now looking at me differently,” Moxey lamented.

“This may cause me to lose my job and all.

“I am also fearful for my life because his (the shooting victim) family members may be out there thinking I did it [committed a murder] or my friends did it when we did not do it.

“People are now looking at us funny, especially me, who does not [get] in any trouble. I have a 9 to 5 job, I don’t be in any violence. It is just home and work, and I was just trying to get home that night.”

Moxey said when he was released on Monday from CDU, no explanation was given to him for his arrest and detainment.

“They just said, ‘go’ as they had found the two persons who did the murder and the armed robbery,” he claimed.

“The system just is not right”

Moxey said his first stop was to his place of employment to explain what had transpired over the weekend.

He said he now wants his photos to be removed from The Bahamas Ma Bey website as the claims levied against him are false.

Moxey’s mother, Tonia Sturrup told Eyewitness News Online that she will fight to clear her son’s name as he has never been in any problems with the law.

“I just want the public to know that despite all the bad and negative comments on social media, they will know that my son is innocent and has nothing to do with this murder that took place on First Street.

“I just want my son’s innocence back,” Sturrup pleaded.

“At the end of the day I will fight for my son because I know he is not involved in this.

“It is very hurtful to go through a situation like this, especially knowing the way I raised my child.

“People are on Facebook saying, ‘oh your one good son’ and yes, I can say my good son because he never put me through any problems.

“Everything the media puts out there, people are quick to judge without even knowing the full story.

“A story was put out there that is not even true, and people just went with it.

“I just want to clear his name and his face so that society does not look at him as a menace and so that he is not labelled as a menace to society,”

Meanwhile, up to press time last night calls placed to the officer in charge of CDU, Emerick Seymour, went unanswered.