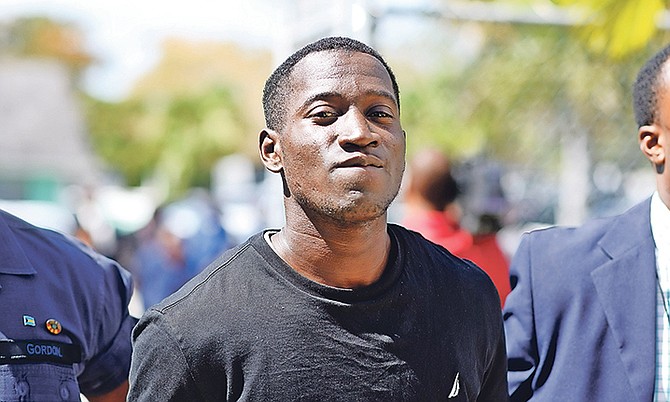 Vernal Johnson looks at the press while being escorted to court. (Photo courtesy of tribune242.com)

A 25-year-old man was arraigned in Magistrates Court this afternoon in connection with a club shooting that left one man dead and two others wounded.

Vernal Johnson, of Dumping Ground Corner, appeared before Magistrate Subusola Swain and was charged with one count on murder and two counts of attempted murder stemming from the incident on February 9.

It is alleged that Johnson murdered Rico Taylor and attempted to kill Anfernee Major and Jarvis Joseph.

According to police, shortly after 11:00 p.m. on the day in question, a group of persons were at a nightclub off Poinciana Drive, when three men entered club and got into an argument with one of the patrons. One of the three men, pulled out a weapon and fired into the crowd resulting in three men being shot.

The victims were taken to hospital by ambulance where one of them died a short time later. The other two men were listed as serious but stable.

Johnson was not required to enter a plea to the charges and was remanded to the Department of Corrections until his trial on April 12.