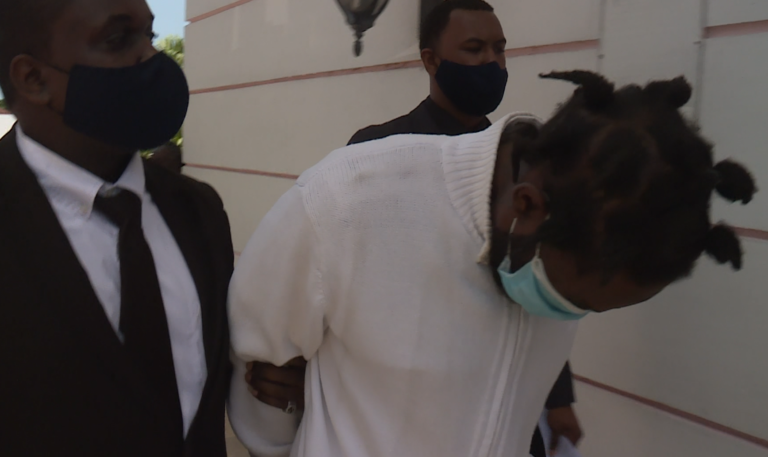 Matthew Oman Sandilands, of Melvern Road, is escorted into court on Tuesday, August 24, 2021.

NASSAU, BAHAMAS — A 41-year-old man yesterday pleaded not guilty to stealing 55 Free National Movement (FNM) posters valued at $495 in the Mount Moriah constituency over the weekend.

Prosecutors allege that between August 20 and August 22, Sandilands stole the “It’s about your future” posters off utility poles along Melvern Road, Yellow Elder Gardens.

Sandilands, who was represented by Attorney Keod Smith, was granted $500 bail and is expected to return to court for trial on December 1.

Prime Minister Dr Hubert Minnis rang the bell last week, announcing that the next General Election will be held on September 16.

Hours after the prime minister’s announcement, political parties mobilized to begin posting their flyers and other paraphernalia around New Providence.

By the next day, major thoroughfares throughout the island were blanketed with party paraphernalia.

In a video posted over the weekend, Mount Moriah incumbent Marvin Dames alleged that a vehicle with Progressive Liberal Party (PLP) flags was involved in removing FNM posters from the area and replacing them with PLP paraphernalia.

Commissioner of Police Paul Rolle has reminded the public that it is an offense to interfere with or destroy political parties’ paraphernalia and individuals caught doing so will be prosecuted.

Rolle advised that he has established an Election Investigation Unit that will be responsible for investigating all matters related to the General Election.

The beach area, the trees are being covered with banners, it is a joke to see how many posters on the lawn by Goodman’s Bay, this is trashy and excessive, this place is a joke and Rolle and his officers team are another joke, another example of power struggle!!!!!!!!!!!!!!!!