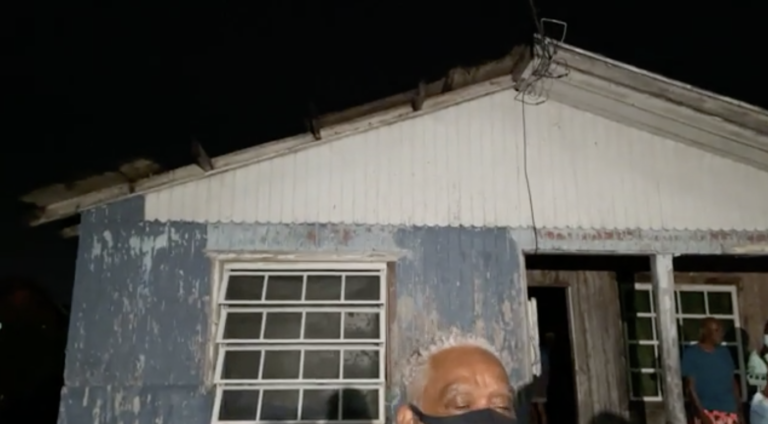 NASSAU, BAHAMAS — Gordon Mckenzie, 58, supports his four grandchildren and daughter in a one-story home on Key West Street that has half its roof, exposing one bedroom to the elements, and no power since summer of last year.

Inside the home, the street light pole opposite cast light through the open front door, McKenzie told Eyewitness News he has tried to hold on, but with his government salary it has not been enough to make headway.

He cleans yards and some beaches for the Ministry of Works.

“I clean yards and ting’ on the beach. That’s fulltime. But I gone in debt right. I don’t want to go back in no more debt, borrowing money from the bank again.

“Although I really need it right and they gone give it to me, I try to hold out for my pension.

“When I get old enough and then you look, all the money gone, no pension I leave for my grandchildren when I’m gone.

In a corner in front of the home was an old television, a few small appliances, and other debris obscured by the tall, patchy grass.

McKenzie said he spent $40 of the $80 he had to get someone to clean and remove the garbage and debris, but the man had only done half the job.

He explained that he chose to spend the money to have the items removed to make the yard safer for the children to play, and for it to look a bit better.

“All I can do is try,” said McKenzie.

“That is all I can do. None of my children work in this house, only me.”

The home is a generational property.

The family has gone without power since around June 2020.

“I gone to put $500 on the bill and I saw the meter start running slow, slow,” he explained.

“I gone back to BEC and I explained to them.

“They told me I need to rewire the whole house all over again.

“That’s just to rewire the house, we ain’t even talking about the bill to – I got to buy the things too.

“That was too much.”

McKenzie has a 24-year-old daughter and 26-year-old son, both of whom are out of work, who also live with him.

His son has two daughters, ages three and 10.

His daughter, who has moved out, has two girls, age four and six.

They attend virtual school by using the neighbor’s WiFi on tablets provided by their schools — EP Roberts, CI Gibson and Columbus Primary — though the low connection provides challenges.

When it rains heavily, McKenzie and others in the home bail the water out.

“If it rains it pours,” said Erica Albury, the mother of a four-year-old daughter and 15-year-old son.

“They have to bail the water out.

“His son tried to fix it (the roof) some time ago – that was with old wood, but it’s still leaking.

McKenzie’s daughter has been out of work since last March when the pandemic took hold of the nation, forcing closures and widespread lockdowns.

When asked what she did before for work, he said: “She wasn’t working for a hotel or nothing like that. She just was, ain’t doing nothing to talk about. That’s all I could say.”

“It’s only me right now trying to keep my head above waters,” he said.

Minister of State for Social Services Lisa Rahming, who visited residents of Key West Street and surrounding areas last week with officials from Urban Renewal, pledged to assist McKenzie and his family and rebuild the home.

“We’ve already promised him that Teen Challenge is going to team up with us,” she said.

“It is supposed to be a time of joy and a time of happiness.

“And so, we have to provide [for them]. Of course, we are going to find out exactly where these kids are doing the virtual.”

She returned to the family on Friday, according to Albury, who said the minister advised them that they would be placed in an apartment at an affordable rent and provided food assistance until arrangement the home was rebuilt.

Speaking to the assistance, McKenzie said: “That makes me feel strong until I get a little stronger. I appreciate it. It means a lot, you know what I mean.”